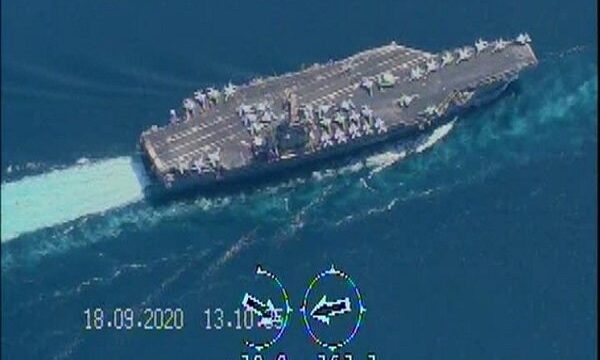 IRGC Navy Commander Rear Admiral Ali Reza Tangsiri announced on Wednesday that the US Nimitz-Class aircraft carrier and its escorts were monitored by home-made drones at the entrance of the Persian Gulf.

Addressing a ceremony to deliver 188 new drones and helicopters to the IRGC Navy in the Port city of Bandar Abbas, Tangsiri said, “In this tracing operation, Nimitz aircraft carrier along with escorting warships, including 2 destroyers (with body numbers) 114 and 104, warships 58 and 59, two patrolling small battleships 9 and 12 and the coast guard vessel 1333 of the terrorist US Army were identified and traced before entering the Strait of Hormuz and the Persian Gulf,” Fars News reported.

He said that monitoring all moves in the Persian Gulf, the Strait of Hormuz and the Sea of Oman will be possible with the new drones, which have strengthened Iran’s power in aerial monitoring to a large degree.

In a relevant development earlier this month, the Iranian Army also announced that its homemade drone “Karrar” had intercepted a US plane and two drones that had illegally intruded the country’s Air Defense Identification Zone (ADIZ).

The Army announced in a statement that, during Zolfaqar 99 drills, one P-8 Poseidon aircraft, MQ-9, and RQ-4 drones, illegally entered the country’s Air Defense Identification Zone (ADIZ) while being in full observation of the country’s integrated air defense network from miles away.

The statement stressed that the US army’s move was in full violation of the international rules and regulations.

The statement added that the American aircraft and drones had ignored the warnings of the radar systems of the Army Air Defense Force, and thus were intercepted by Karrar drone to distance themselves from the military exercise area.

The American aircraft then changed their route and distanced themselves from the area.

Iran-US tensions, IRGC, US Nimitz-Class aircraft carrier September 23, 2020
Iran dismisses US allegation, says Trump’s UN speech ‘hackneyed, meant for domestic consumption’
Don’t believe all the US lies on Iran. America’s sole aim is to get the country it ‘lost’ in 1979 back in its grip