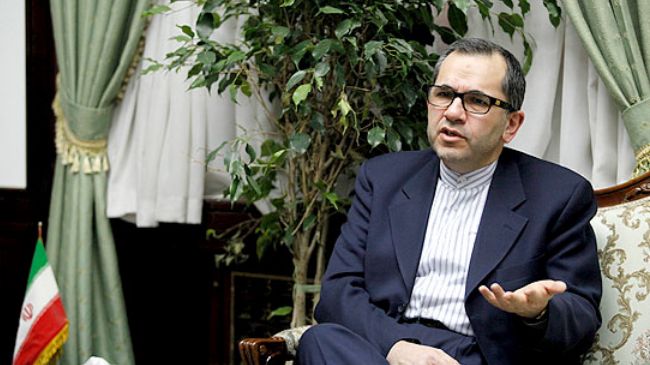 Iran’s permanent ambassador to the United Nations rejects as “hackneyed” US President Donald Trump’s allegations made against Tehran during his speech at the UN General Assembly, saying the comments were meant “for domestic consumption”.

Majid Takht Ravanchi said on Wednesday that Trump’s speech had nothing new and only contained false and unfounded claims against Iran.

“Trump’s remarks were hackneyed altogether and contained nothing new. And given the current climate of [presidential] election in the US, his remarks were for domestic consumption and meant to gain votes,” he added.

During his virtual speech at the UN on Tuesday, Trump boasted about Washington’s withdrawal from the landmark 2015 Iran nuclear deal and his administration’s imposition of crippling sanctions on the Islamic Republic.

He also once again accused Iran of sponsoring terrorism, and while claiming to have obliterated the Daesh terror outfit, he bragged about the January assassination of Iran’s top anti-terrorism commander Major General Qassem Soleimani.

Trump’s accusations against Iran come as the US has been directly or indirectly providing support, including financial assistance and logistics, to terror outfits in the Middle East.

Washington has remained far and above the rest of the world as the globe’s leading arms exporter.

In his first official visit after taking office in 2017, Trump visited Saudi Arabia, among Washington’s allies, where he sealed a multibillion arms deal with Riyadh, which has been pounding its impoverished southern neighbor, Yemen, for more than five years.

The United Arab Emirates, Saudi Arabia’s main partner in the Riyadh-led coalition invading Yemen, is another major importer of US weapons.

Although Trump seeks to take the credit for eliminating Daesh, the group is still active in some countries due to apparent support from states like the US.

Contrary to the US’ anti-Iran claims, Tehran was among the first countries to rush to help its neighbor Iraq when Daesh unleased its brutal war against the Arab country, which was expanded to Syria as well.

General Soleimani, the commander of the Quds Force of Iran’s Islamic Revolution Guards Corps, who was assassinated in a US drone attack near the Iraqi capital Baghdad upon an order by Trump, had played a major role in helping regional countries fight terrorism.

The US assassinated the senior commander as he was on an official visit to Iraq, an attack that the UN expert on extrajudicial killings, Agnes Callamard, condemned as “unlawful” and an “arbitrary killing” that violated the UN charter.

Elsewhere in his remarks, the Iranian ambassador to the UN talked about President Hassan Rouhani’s virtual speech at the UN and the US presidential election in November.

He said America’s upcoming vote was an issue of internal affair, and added, “What matters to us is that the US fulfills its international obligations, and who will become president in the US is the American people’s business.”

In his speech to the 75th UN General Assembly via video-link from Tehran on Tuesday, Rouhani reaffirmed Iran’s determination to hold onto its independence and domestic freedom under whatever circumstances, expressing confidence that the next administration in Washington will inevitably surrender to the Iranian nation’s resilience.

“Any US administration after the upcoming elections will have no choice but to surrender to the resilience of the Iranian nation,” he said.

He noted that Iran, as the oldest democracy in the Middle East, will not trade domestic freedom with foreign interference, and said the Islamic Republic resists being used as “a bargaining chip in US elections and domestic policy.”

He also called Iran “the harbinger of dialog and tolerance, and the champion of the fight against occupation and extremism” that has played a pivotal role in all international and regional peace and reconciliation processes.

Since leaving the historic Iran nuclear deal, known as the Joint Comprehensive Plan of Action, in 2018, the US has been ratcheting up pressure on Iran as part of its so-called maximum pressure campaign.

Through imposing sanctions, Washington has been struggling to choke Iranian economy, threatening other countries to shun business with Tehran or face US punishment.