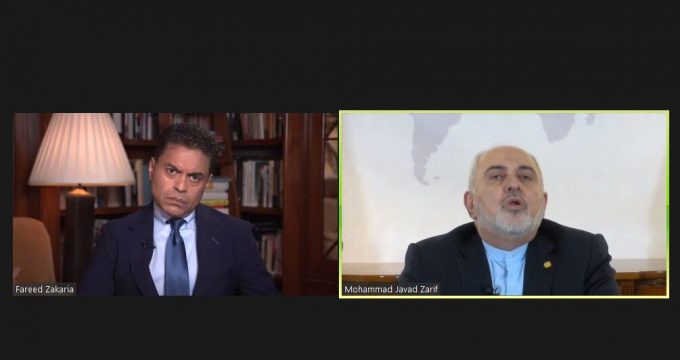 Iran will not renegotiate what it has already negotiated: FM Zarif

Iran’s Foreign Minister Mohammad Javad Zarif has expressed the Islamic Republic’s readiness to hold talks on new issues, stressing, however, that the country will never renegotiate an issue it has already concluded through negotiations.

Zarif made the remarks on Monday as he spoke at a virtual event sponsored by the Council on Foreign Relations, a United States nonprofit think tank in New York.

Iran never hesitates to engage in negotiations, but will not renegotiate an issue that it has already concluded through negotiations, Zarif said in clear allusion to frequent calls by US President Donald Trump, who has been insisting that Iran should give up the 2015 nuclear deal it clinched under Trump’s predecessor with six world powers, and conclude a new agreement with the current administration in the United States.

Iran respects international laws and the JCPOA (the 2015 nuclear deal, known as the Joint Comprehensive Plan of Action) as an international agreement, IRNA quoted him as saying during the event.

It is the United States that must prove it respects this agreement, Zarif said, adding that Iran is still a party to the JCPOA despite the fact that it is not capable of even buying influenza vaccine due to unilateral sanctions imposed on it by the US.

Iran’s foreign minister emphasized that it is the United States that has caused concern for the international community by violating global norms.

Asked whether he believes that the JCPOA is a dead agreement, the top Iranian diplomat said the deal is still alive as proved by the UN Security Council.

But if the US wants to return to the accord through bullying, it should know that the practice of bullying has expired, he added.

US President Trump, a hawkish critic of the JCPOA, unilaterally withdrew Washington from the agreement in May 2018, and unleashed the “toughest ever” sanctions against the Islamic Republic in defiance of global criticism.

On August 14, the UN Security Council almost unanimously refused to support a US-sponsored draft resolution on extending the arms embargo against Iran, which is due to expire in October under the JCPOA.

uring the 15-member Security Council vote, the US received support only from the Dominican Republic for its anti-Iran resolution, leaving it far short of the minimum nine “yes” votes required for adoption.

Last month, Trump said he will “have a deal” with Iran a month after possible victory in the 2020 presidential election.

In response to a question about US Monday announcement of new sanctions on Iran’s Defense Ministry and others, Zarif said Washington’s new bans are nothing new as the US has already exerted all the pressure it could on Iran.

He added that the US hoped the sanctions would bring the Iranian nation to its knees, but it failed to achieve its goals.

US Secretary of State Mike Pompeo announced that Washington had imposed new unilateral sanctions against Tehran after it failed to garner support for its anti-Iran move at the United Nations.

He also said that Trump had issued an executive order “that is a new and powerful tool to enforce the UN arms embargo.”

Council on Foreign Relations (CFR), Iran nuclear deal, JCPOA, Mohammad Javad Zarif September 22, 2020
US rotten from inside, isolated from outside: Salami
US announces new sanctions on Iran defense ministry and others