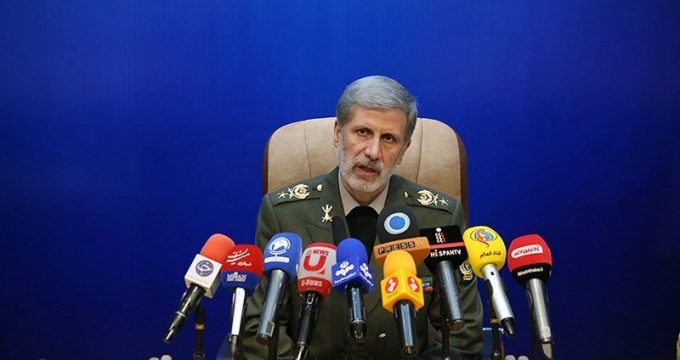 Tasnim – Iran has gained such great military capabilities that it can detect and counter the threats at any location, even outside the border, Defense Minister Brigadier General Amir Hatami said.

In comments in an online meeting with Defense Ministry officials on Tuesday, Brigadier General Hatami said Iran has made such great progress in the scientific, political, and defense spheres that it can “detect and foil any threat at the starting point, even outside the borders” in spite of all cruel threats from the hegemony.

The minister also emphasized that resistance will continue until the enemy is evicted from the West Asia and the region is cleansed of the “Great Satan”, referring to the US.

Iran has turned into an influential power in the global arena, Hatami noted, pointing to the country’s success in designing and manufacturing various products under the pressure of sanctions.

He finally emphasized that the prosecution of those who assassinated top Iranian commander Lt. General Qassem Soleimani will go on vigorously, saying the criminals will be constantly in fear of revenge.

In remarks in July, Leader of the Islamic Revolution Ayatollah Seyed Ali Khamenei warned the United States that Iran will definitely reciprocate the assassination of Lt. General Soleimani.

In a meeting with Iraqi Prime Minister Mustafa al-Kadhimi in Tehran, Ayatollah Khamenei underlined that the Islamic Republic of Iran will never forget the American assassination of the top commander in Iraq and “it will definitely deal the reciprocal blow to Americans.”

On January 3, a US drone strike near Baghdad International Airport assassinated General Soleimani, former commander of the Quds Force of Iran’s Islamic Revolution Guards Corps. The attack — that also killed Abu Mahdi al-Muhandis, the second-in-command of Iraq’s Popular Mobilization Units (PMU) anti-terror group, along with several others — came while General Soleimani was on an official visit to the Iraqi capital.