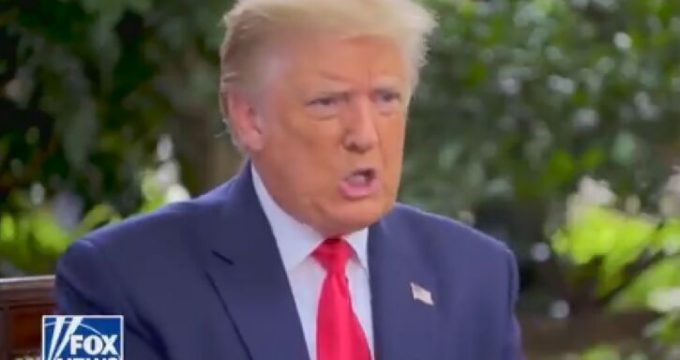 IRNA – US President Donald Trump said in an interview that the Joint Comprehensive Plan of Action served Iran and made any other move impossible so he decided to end it.

Commenting that the JCPOA was a bad agreement, Trump said the accord gave them $150 billion alongside $1.8 billion cash.

Scolding former Secretary of State John Kerry for the agreement, he said Kerry negotiated the JCPOA and gave Iran whatever they wanted, Trump said speaking with Fox News on Sunday.

He added that it is sometimes better to leave the table and say sorry goodbye. Then, they will run after you, because the US has all the cards and people know it.

Trump said the agreement was a stupid one, which made everything impossible, so he put an end to it.

Claiming that he doesn’t want to hurt Iran’s national products, he said he just wants Iran not to have nuclear arms.

Trump himself and Hillary Clinton admitted that the US created ISIS terrorist group to strike power balance in the Middle East.

The US terrorist attack against Iran’s Lieutenant-General Qasem Soleimani and Iraq’s Abu Mahdi who had fought the US-made terrorist groups, including the ISIS, and had defeated them. After the assassination on January 3, Trump announced that he himself had ordered the terrorist attack.