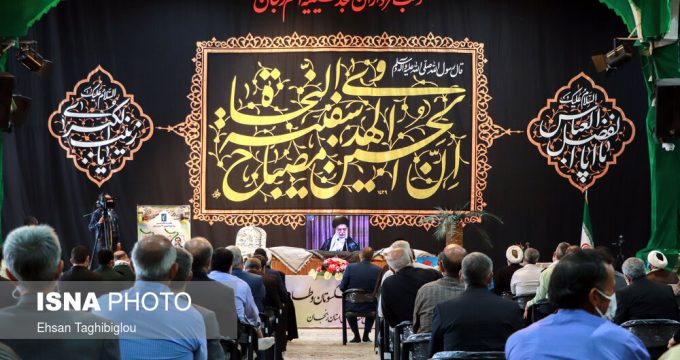 MNA – Leader of Islamic Revolution Ayatollah Seyyed Ali Khamenei hailed the braveries of the Iraq-Iran War veterans, saying that the country stood alone against the US, the Soviet Union and the West during the war.

Ayatollah Khamenei made the remarks in a videoconference meeting with War veterans on Monday, on the 40th anniversary of the beginning of the Sacred Defense – the war Imposed by the former Iraqi dictator Saddam Hussein against Iran.

The Leader noted that those, such the United States, who hired Saddam were hit hard by the revolution and were surprised by the braveries of the Iranian nation.

“Some were worried that a new identity based on religion and Islam would emerge in the region.”

“In the 8-year war on Iran, Saddam was just a tool in the hands of big powers like the US that were seriously harmed by the 1979 Revolution, or governments that worried about the creation of a new Islamic power in the region. The USSR, some European countries and NATO were against us.”

“During the first years of the war, which were shortly after the Islamic Revolution, the armed forces weren’t in good shape and we were extremely short of equipment. These persuaded the enemy to attack us. Imam Khomeini managed the war amazingly under such conditions.”

“Documents found later revealed that the United States had pre-war agreements with Saddam.”

“Abundant arms and intelligence assistance was given to Saddam and the Baath Party; military convoys were transported to Saudi Arabia, Iraq and Kuwait via the UAE ports and were handed over to Saddam’s forces,” he added.

Stressing the necessity of commemorating war veterans as “a national responsibility,” the Leader said, “Veterans and warriors who are honored today are those who gave up their comfort, life, family and future, and employed all their capabilities against the enemy.”

“They defended Islam, the revolution and honor. Some of them ascended [were martyred] and some stayed and finished the work.”

The Leader warned against the grave danger of distortion of the ideals of the Sacred Defense.

The issue of twisting Sacred Defense is a serious matter and a big danger, he said.

Elsewhere in his remarks, the leader referred to the upcoming Arbaeen mourning ceremonies — the 40th day after the martyrdom of third Shia Imam, Imam Hossein (PBUH) — urging people to follow the guidelines of the Health Ministry while observing the rituals amid pandemic.

He expressed deep regret over a spike in coronavirus infections, calling on Iranians to fully adhere to health guidelines in a bid to break the chain of the outbreak.