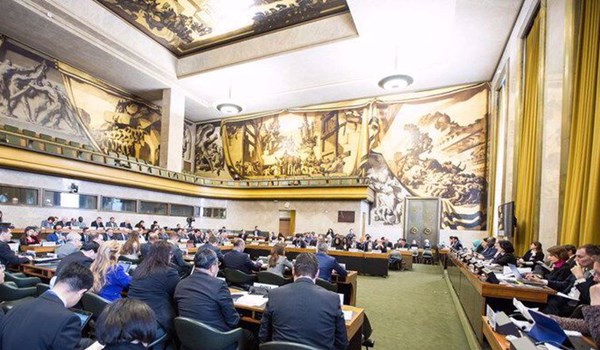 FNA – Iran warned against Washington’s “dangerous” defiance of international law as US President Donald Trump has signaled that it seeks to illegally extend an expiring arms embargo on Iran.

Political Adviser to Iran’s Permanent Mission to Geneva Nabi Azadi made the comments in response to the earlier remarks by Washington’s representative to the Geneva Disarmament Conference Robert Wood on Thursday.

The American envoy accused Iran of backing terrorism and said that Washington seeks to extend a United Nations ban on Tehran despite its expiration in October under UN Security Council Resolution 2231, which endorsed the Iran nuclear deal in 2015.

Azadi rejected the statements, saying that such a move violates Resolution 2231 and amounts to an attempt to destroy multilateral bodies such as the UN after Washington failed to gain international backing to extend the embargo at the Security Council in August.

Azadi said US President Donald Trump’s repeated threats of using force against Iran are provocative and in violation of the UN Charter about prohibition of threat or use of force or serious threat to international peace and security.

The Iranian representative warned against serious consequences of Washington’s irresponsible policies and illegal actions, saying that Tehran will swiftly respond in kind to any act of aggression against the nation, sovereignty, territorial integrity and its national interests.

Tehran has particularly been disappointed with failure of the three European signatories to the Joint Comprehensive Plan of Action (JCPOA) — Britain, France and Germany — to protect its business interests under the deal after the United States’ withdrawal.

On January 5, Iran took a final step in reducing its commitments under the JCPOA, and said it would no longer observe any operational limitations on its nuclear industry, whether concerning the capacity and level of uranium enrichment, the volume of stockpiled uranium or research and development.

The United Nations Security Council resoundingly rejected last month the second US bid to extend an arms embargo on Iran, which is due to expire in October.