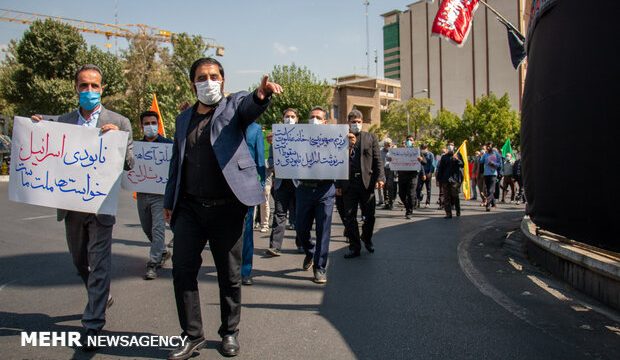 MNA – Crowds of Tehran residents took to the streets of the capital on Thursday to condemn the disgraceful move by the UAE and Bahrain in the normalization of relations with the Israeli regime.

The gathering was held at Palestine Square, downtown Tehran, by people from different walks of life, including university students, in support of the Palestinian cause against the oppressions of the Zionist regime.

Participants expressed solidarity with the people of Palestine, holding up placards and shouting slogans “Israeli regime, source of all corruptions”, “The Zionist, Saudi and US regimes will be destroyed by the grace of God” and “Non-existence will be the fate of the Israeli regime.”

On September 11, Bahrain agreed to normalize relations with the Israeli regime, becoming the latest Arab nation to do so as part of a broader diplomatic push by US President Donald Trump and his administration to further ease the regime’s relative isolation in West Asia

It came roughly a month after a similar announcement by Trump on a deal between the United Arab Emirates (UAE) and the Zionist regime to forge formal ties.

Following the announcement at the White House, Palestinian officials have condemned the deal as another “stab in the back” by an Arab state.

Iran has strongly condemned the normalization agreements, saying such moves have sacrificed the Palestinian cause against the occupation for the upcoming US presidential election.