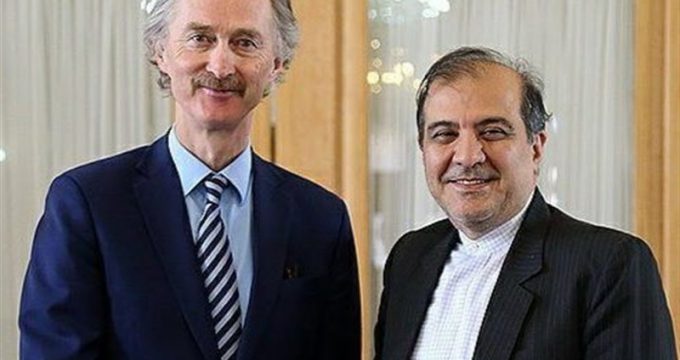 Tasnim – A senior assistant to the Iranian foreign minister in special political affairs held talks with UN Special Envoy for Syria Geir O. Pedersen on the latest situation in the Arab country.

In a telephone conversation on Wednesday, Ali Asghar Khaji and Pedersen exchanged views on issues related to the Syrian Constitutional Committee, Idlib, and humanitarian situation in the Arab country.

They also reiterated support for the political process and continued work of the Constitutional Committee, and called on the international community to assist the Syrian people considering the difficult humanitarian situation in the country, especially amid the coronavirus outbreak.

Khaji underlined the necessity of implementing the Idlib agreements in a bid to maintain calm in the region and prevent an escalation of tensions, the Foreign Ministry reported.

After the outbreak of war and foreign militancy in Syria in 2011, Iran stood by the Syrian government and supported its people against terrorist groups, including Daesh (ISIL or ISIS).

The war in Syria has killed hundreds of thousands of people and displaced millions.