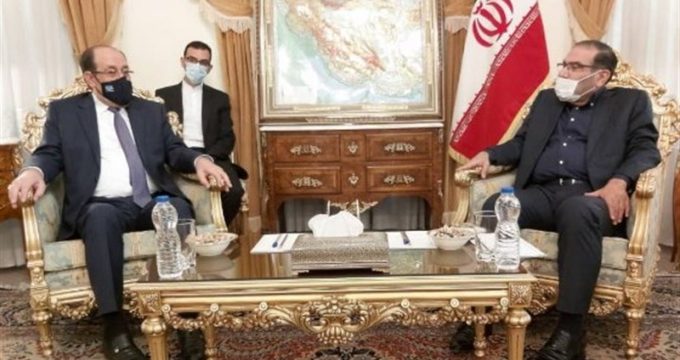 Israeli dream of Nile-to-Euphrates not to come true: Shamkhani

Tasnim – Secretary of Iran’s Supreme National Security Council Ali Shamkhani denounced the Arab governments that have normalized ties with Israel, saying the Zionist regime would never achieve the dream of expanding from the Nile to the Euphrates with such plots.

In a meeting with former Iraqi prime minister Nouri al-Maliki, held in Tehran on Monday, Shamkhani warned the “treacherous and compromising” Arab leaders who have sacrificed the interests of the Muslim world and the Palestinian cause to achieve their ephemeral objectives.

“The Muslim world will never allow the treacherous plot (of Israel) for the control (of Muslim territories) from the Nile to the Euphrates to be realized,” he said.

Shamkhani was alluding to the recent steps taken by the United Arab Emirates (UAE) and Bahrain to normalize political and economic relations with Israel through deals mediated by the administration of US President Donald Trump, Press TV reported.

Pointing to the divisive and insecure US strategy in the region, Shamkhani underlined that the most important priority for other countries to counter this approach was maintaining their internal cohesion and unity and to undertake common measures.

Shamkhani also touched on the ongoing situation in the neighboring Iraq, saying that the enemies of Iraq’s unity and progress seek to turn the country’s upcoming elections into a medium for fomenting discord, conflict and, ultimately, insecurity.

The top Iranian official then emphasized the need for the Iraqis to maintain vigilance and unity among all people, particularly Shia parties, groups and personalities.

During the meeting, Maliki praised the important role of the Islamic Republic in the fight against terrorism and the establishment of stability and security in the region, stressing the need for collaboration between Iran and Iraq in important regional and international issues.

“As we have eliminated terrorism from Iraq and the region via unity and resistance, we will also be able to neutralize the threats directed at the Holy Quds and the existence of Palestine through joint efforts of Muslim countries,” he said.