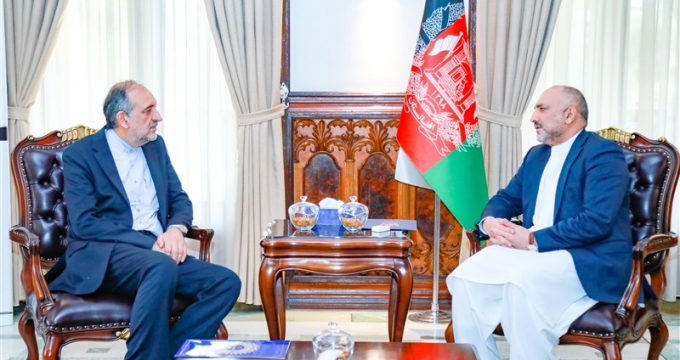 Tasnim – Iran’s ambassador to Kabul reaffirmed the country’s commitment to supporting the peace process in Afghanistan under the guidance and ownership of Afghan people.

In a meeting in Kabul, the Iranian ambassador, Bahador Aminian, and caretaker of the Foreign Ministry of Afghanistan Hanif Atmar discussed various issues, including ways to enhance the economic, political and cultural cooperation between the two countries.

They also talked about the latest developments in Afghanistan, the peace talks between the Kabul government and the Taliban, significance of regional consensus on the peace process in Afghanistan, reduction of tensions and establishment of an immediate ceasefire, and efforts to protect the achievements of the past 19 years in Afghanistan.

The Iranian ambassador reaffirmed Tehran’s support for the Afghan peace process under the guidance and ownership of Afghan people and for the Islamic Republic system in Afghanistan.

For his part, the senior Afghan diplomat praised Iran for supporting the Afghan migrants and helping them receive identification documents and new passports.

In a telephone conversation with President of Afghanistan Ashraf Ghani in August, Iranian President Hassan Rouhani expressed Tehran’s support for the peace process in Afghanistan under the guidance of the Kabul government, hoping that the intra-Afghan negotiations would yield results with the inclusion of all Afghan groups.