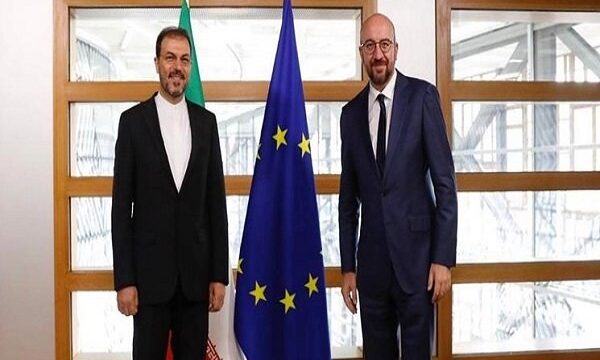 MNA – President of the European Council Charles Michel emphasized preserving and implementing JCPOA and the significance of relations between Iran and the EU.

Iranian Ambassador to Brussels Ghoamhossein Dehghani submitted his credentials to the President of the European Council Charles Michel on Saturday.

He had presented his credentials to the President of the European Commission Ursula von der Leyen three weeks ago.

During the meeting, both sides conferred on various fields including the latest development regarding JCPOA and the necessity to preserve and implement the Nuclear Deal by the Security Council and the JCPOA participants, countering US illegal actions, regional developments, the role of the Islamic Republic in the fight against terrorism, Iran’s readiness to cooperate with regional countries and the EU, and expanding bilateral economic relations.

Charles Michel further emphasized preserving and implementing the Nuclear Deal and stressed the importance of relations between Iran and the EU, noting that friendly regionals ties can ensure peace and security which is also beneficial for the European Union.