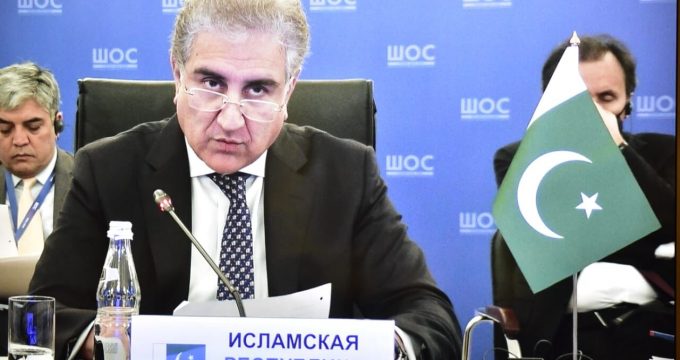 IRNA — Speaking at a meeting of the Shanghai Cooperation Organization in Moscow on Thursday, the Pakistani Foreign Minister has stressed the need to fully implement the Joint Comprehensive Plan of Action (JCPOA).

Shah Mahmood Qureshi said: “We share the stance of our SCO partners on effective implementation of the Joint Comprehensive Plan of Action on Iranian nuclear issue.

“We believe that discussions in SCO on prevention of arms race in outer space, Biological Weapons Convention (BWC) and ensuring International Information Security, will enrich the debate and allow us to have a unified stance on these issues,” he said.

The minister went on to say that there is an urgent need for new legal regimes to deal with emerging challenges in arms control and disarmament.

Qureshi said while the COVID-19 Pandemic has devastated the lives and livelihoods of people across the world, it has also underscored the imperative of working together against common threats and challenges.

“Despite the formidable difficulties, we have continued fruitful collaboration in SCO, marked by solidarity and mutual support, under the able stewardship of the Russian Federation,” he noted.

He added that Pakistan is open to share its experience in combating the pandemic in an effective manner keeping the total cases and fatalities relatively low.

“We also believe it is wrong to politicize the pandemic and use it for stigmatizing regions, religions, or communities,” Qureshi viewed.

The foreign minister added the world today is becoming increasingly multipolar. The competition between the old and emerging powers is already reshaping the contours of contemporary international relations.

“As expected, this is not a smooth process. The intensifying contest between the forces of multilateralism, globalization and shared development on one side and unilateralism, isolationism and protectionism on the other has created a lot of uncertainty,” said the official.

He strongly believed that in this uncertain and brutally competitive environment that is full of zero-sum prophecies, cooperation and not confrontation should be the driving force in international politics.

“We also reaffirm our principled position that the reform of the UN Security Council should be achieved through consensus for a more representative, democratic, effective and accountable Security Council,” Qureshi noted.

The foreign minister was of the view that the peaceful resolution of outstanding disputes is a pre-requisite for achieving development, economic growth, poverty alleviation, and social uplift of our masses.

“We must strongly condemn and oppose any unilateral and illegal measures to change the status of disputed territories in violation of UN Security Council Resolutions,” he said.

“Pakistan has long held that there is no military solution to the conflict in Afghanistan and that a negotiated political settlement is the only way forward,” said the minister.

He added as a shared responsibility, Pakistan has assiduously supported the efforts for a peace and reconciliation process that is Afghan-led and Afghan-owned.

“It is critical that the Intra-Afghan negotiations commence at the earliest,” he said.

The FM noted it is imperative to be cognizant of the role of “spoilers” — within and outside –who do not want peace and stability to return to Afghanistan.

Shah Mahmood Qureshi in his remarks said while tackling terrorism and extremism continues to be one of our highest priorities, we must not allow any country to use terrorism related allegations as a political tool to malign and victimize any country, religion or race.

“We must also condemn and hold accountable the perpetrators of State terrorism against people under illegal occupation in disputed territories,” he said.

The minister said SCO is a vital platform for forging closer synergy with regional partners and realizing the benefits of the emerging confluence between the Belt and Road Initiative (BRI) and Eurasian Economic Union (EEU).

“With its network of infrastructure and energy projects and industrial parks, CPEC is destined to bring economic prosperity for Pakistan and the region and beyond. In particular, Special Economic Zones under CPEC offer excellent incentives for investment,” said Qureshi.

He noted that the SCO members should work together to address the resurgence of fascist ideologies and violent nationalism anywhere in the world, especially in our region.

“SCO should focus on promoting regional connectivity projects. We must not view these projects through a narrow political prism but rather whole-heartedly pursue them for the achievement of sustainable development in the region,” he added.

“We should work together to project SCO as an effective forum for regional development and a new kind of international organization based on the ideals of “Shanghai spirit”,” said the minister.