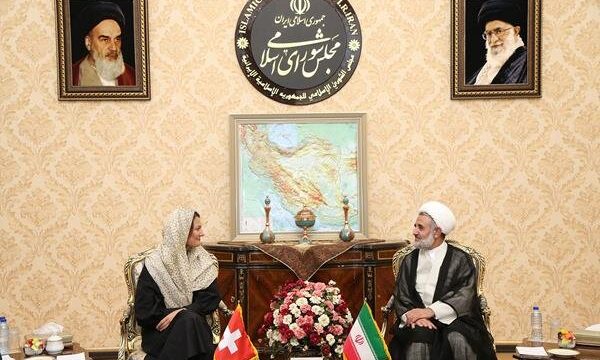 MNA – A senior Iranian lawmaker called on the European counties to stand against the United States’ hawkish policies against other countries.

The Chairman of the Iranian Parliament’s National Security and Foreign Policy Commission Mojtaba Zonnour held a meeting with visiting President of the Swiss National Council’s Foreign Affairs Committee Tiana Moser and member of the Council of States and President of the Council of States Security Policy Committee Thomas Minder in Tehran on Monday.

During the meeting, Zonnour criticized the repeated violations of the international deals, such as the environmental treaties, the control of weapons of mass destruction and the UN Security Council agreements, by the United States as well as its imposition of unilateral sanctions against other countries.

“It is necessary to stand against the unilateral and illegal actions of the United States in the international arena,” he added.

Elsewhere in his remarks, he referred to the century-old amicable ties between Iran and Switzerland, saying, “The development of parliamentary relations between the Swiss and Iranian parliaments, especially between their National Security and Foreign Policy Commissions, will play an effective role in facilitating and expanding interactions between the two countries.”

“Utilizing the capabilities of the two countries will help to further develop mutual economic, scientific, environmental and humanitarian cooperation,” he added.

Switzerland’s Moser, for her part, also stressed the need to develop cooperation in various fields with Iran, saying, “Increasing parliamentary interactions between the representatives of the Iranian and Swiss parliaments, especially between specialized commissions, is important in expanding cooperation between the two countries.”

She also praised the efforts of the Islamic Republic of Iran in helping to ensure stability and security in the region, including the fight against terrorism, and said the history of regional cooperation between the two countries in humanitarian affairs is a good example for other countries.

She also expressed hope for the realization of her country’s efforts to establish and develop a humanitarian financial channel between Tehran and Bern.