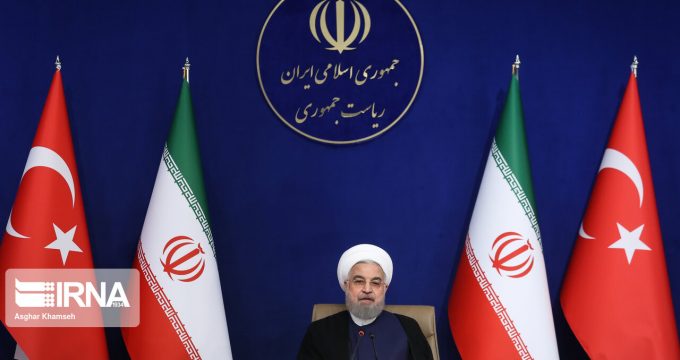 Expanding ties between Iran, Turkey only way to foil plots

MNA – Iranian President Hassan Rouhani referred to Iran and Turkey as two major regional powers and noted that expanding bilateral ties is the only way to foil conspiracies.

Addressing his counterpart via videoconference in the Sixth Meeting of Supreme Council of Strategic Relations between Iran and Turkey on Tuesday, Rouhani said, “I am very pleased to have another opportunity with you and your colleagues to discuss expanding cooperation between the countries.”

He further expressed sympathy for the Turkish people who were infected by the COVID-19 and wished them a speedy recovery.

He went on to say that relations between the two countries have been founded on a very solid foundation throughout history.

“Fortunately, the borders between Iran and Turkey represent peace and friendship, and the two governments, especially in the last seven years, have been trying to develop bilateral relations and regional and international cooperation,” he added.

“The two countries are two major powers in the region, and there have always been hostilities against them. Strengthening friendly relations between the two countries is the only way to overcome the conspiracies,” he underlined.