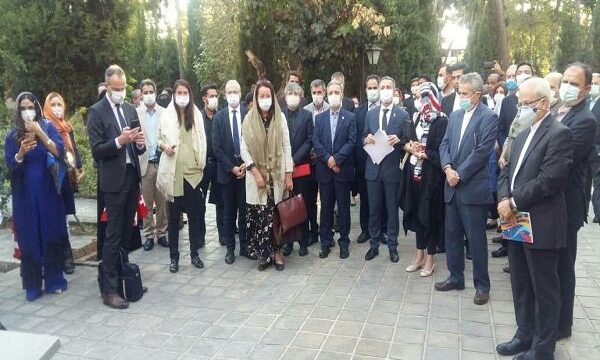 MNA – The exhibition of 100th anniversary of Iran-Switzerland diplomatic relations was inaugurated on Sunday in the presence of Swiss Foreign Minister in Tehran.

The exhibition was inaugurated in the presence of Swiss Foreign Minister Ignazio Cassis and some Iranian officials in the Negarestan Palace in Tehran.

At the beginning of the ceremony, the Chancellor of of Tehran University Mahmoud Nili Ahmadabadi referred to the history of cooperation and exchanges between the University of Tehran and Swiss universities and scientific and cultural centers in recent years.

Referring to visiting the cities of Isfahan and Tehran and the rich history of Iran, Ignazio Cassis said that this exhibition testifies to the friendship between Iran and Switzerland.

Emphasizing the impact of diplomacy and dialogue in promoting relations between countries, Cassis said that diplomats build bridges of trust and communication; a feature that has been repeated over the past 100 years in Iran-Switzerland diplomatic relations.

He went on to say that Switzerland’s goal has always been to strengthen the interests of both parties.

During the ceremony, Deputy of Iranian Foreign Minister Seyyed Mohammad Kazem Sajadpour also said that the historical documents of Iran-Switzerland relations show three characteristics of interest and attractiveness of the two nations to each other in various fields such as education, art, music and diplomacy.

Another feature of the relations between the two countries is cooperation in various issues of social, political, economic, cultural, and humanitarian aid, he added, expressing hope that the two countries continue to expand their bilateral ties.