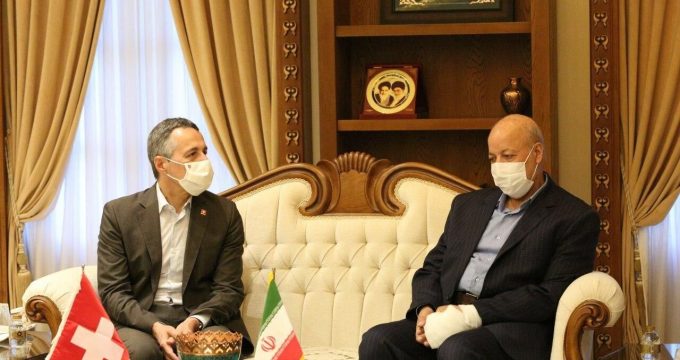 IRNA — Head of the Department of Foreign Affairs of Switzerland Ignazio Cassis said on Saturday that scientific and tourism relations between his country and Iran should be developed in post-coronavirus era.

He made the remarks in a meeting with Isfahan Governor General Abbas Rezaei late on Saturday.

“Tomorrow in Tehran, in an official meeting, we will celebrate the centenary of joint diplomatic activities between Iran and Switzerland,” Cassis said.

Relations between the two countries are 100 years old and have continued since the late 19th century with the signing of the peace and trade agreement between Tehran and Bern, he said, noting that peace and trade are two important factors in the development of countries, and “we are here today to say that Switzerland has always sought peace and tranquility”.

Referring to Switzerland’s mediating role between Iran and the US, Cassis said that Switzerland is trying to provide the minimum for dialogue between the two countries.

“Prior to visiting Tehran to hold an official meeting with the Iranian president and foreign minister, I wanted to visit Mr. Zarif’s hometown, and today I watched a glimpse of the beauties of this city,” he said.

Foreign Ministry spokesman Saeed Khatibzadeh said on Friday that the official schedule of the Swiss foreign minister will begin on Sunday in Tehran after a short stop in Isfahan, the most important of which is the meeting on the 100th anniversary of the start of relations between the two countries.