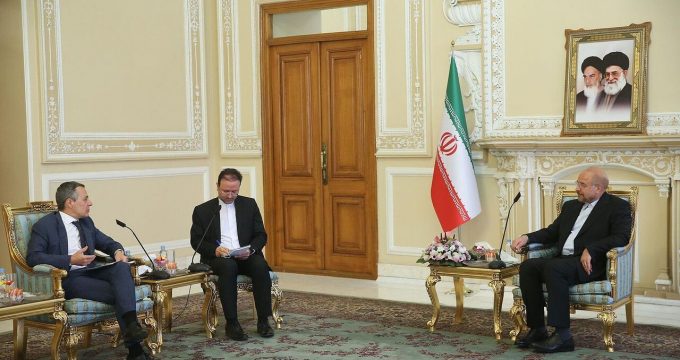 Qalibaf: Iranians never to forgive damages caused by US sanctions

IRNA – IranianParliament Speaker Mohammad Baqer Qalibaf said on Sunday that the Iranian nation will never forgive and forget the losses that were caused as the result of the sanctions imposed against Iran.

He made the remarks in a meeting with Head of the Department of Foreign Affairs of Switzerland Ignazio Cassis, noting that Iran is cynical about the United States due to its unilateral, cruel, and unlawful sanctions.

Iran has made the decisive decision to overcome the situation as the country enjoys a high capacity in many areas, the Iranian parliament speaker stated.

Touching on the assassination of Iran’s anti-terror commander Lieutenant-General Qasem Soleimani by the US, he pointed out that the steps taken by the late commander had impeded the spread of terrorism to Europe, but the US assassinated him.

Switzerland has always stepped in to promote global peace and humanitarian measures, he said, voicing congratulations on the 100th anniversary of diplomatic relations between Iran and Switzerland.

In the previous years, an agreement and a document of cooperation between the two states have been inked, which the pursuit of its provisions will help boost the mutual relations.

Head of the Department of Foreign Affairs of Switzerland Ignazio Cassis, for his part, underlined that opening financial channels between the two countries is not enough and it must be developed.

Iran has suffered from some economic problems resulting from cruel sanctions, he stated, expressing the hope that Swiss would play its role to protect the rights.

Commenting on a number of Swiss companies based in Iran, he underlined that the companies have been active in the country in spite of the sanctions.

Switzerland will make the maximum efforts to advance international discourse and to bolster the bilateral relations, he underscored.