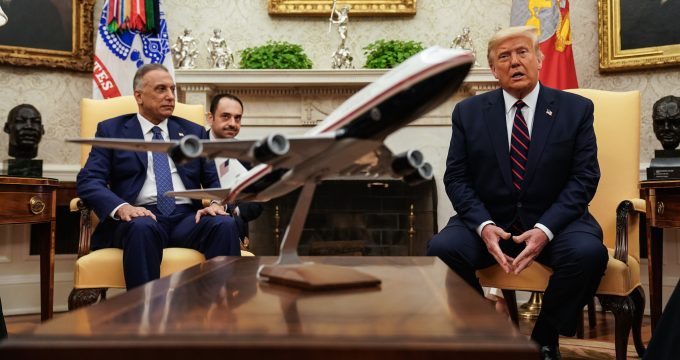 Will Iraqi PM’s visit to US impact Iran-Iraq energy ties?

MNA | Ebrahim Fallahi: As the US waivers for Iraq’s electricity imports from Iran are nearing their expiration in Sep., the Iraqi Prime Minister’s recent visit to the US has raised some questions about the future of the two neighbors’ energy ties.

Some analysts believe that al Kadhimi’s travel to the US and some other Arab states including Egypt and Jordan is somehow preparation for reducing the country’s energy reliance on Iran, however, many others believe that such a goal, even if existed, is far from being realized.

Many experts and analysts believe that the agreements reached during these trips are not official and executable yet.

“Iraq’s recent energy deals with US companies were a mixed bag of loose agreements that need to be translated into firm commercial terms at a time when Washington failed to extend much-needed waivers for Iranian energy imports due to expire in September,” S&P Global reported on August 26.

Meanwhile, Iraqi officials also believe that the agreements reached during the Prime Minister’s visit to the United States on energy exchanges have little chance of reaching a conclusion, since the two countries’ previous such agreements haven’t yet been realized.

So Iran still remains the only option for the Iraqi government for the safe and sustainable supply of the country’s electricity needs.

The waiver on electricity imports from Iran

The US’s 120-day waivers for Iraq’s energy imports from Iran are due to be expired in September and the US has not yet made any clear announcement about ending or extending the mentioned waivers.

Although, the two sides did not openly discuss this issue during al-Khadimi’s visit to the US it is very unlikely that Washington would be able to end the mentioned waivers, since Iraq has recently signed a two-year deal with Iran for importing electricity, and also there is no plausible replacement for the Iranian electricity at the moment.

“The US is highly unlikely to end its sanctions’ waivers, particularly with the degree of focus on the [Persian] Gulf Cooperation Council Interconnection Authority connectivity for Iraq,” said Patrick Osgood, senior Iraq analyst at Control Risks.

The chances of the US ending the waivers further wane as Iraq’s oil production is also declined under the pressures by OPEC+ to comply with the pact and to compensate for previous non-compliances leaving the country’s electricity production more vulnerable than before.

The US deals in Iraq

As mentioned before, during al Kadhimi’s visit to Washington, several energy agreements were signed between the two sides, including a $1.2 billion deal with General Electric (GE).

These deals, however, seem not to be convincing for many Iraqi officials and analysts, since they are not “something new” and the US companies have already failed to fulfill their commitments to Iraq’s energy projects.

Back in October 2019, the former council of ministers approved a GE proposal to rehabilitate Iraq’s power grid and substations, including 750 kilometers (km) of transmission lines and 17 substations in the liberated areas of Mosul and Anbar provinces, and the provision of interconnectivity with Jordan with a total cost of $727 million, according to Harry Istepanian, a senior fellow at the Iraq Energy Institute.

“The former government also agreed with GE to undertake contracts valued at $500 million for the upgrade and maintenance of 6,000 MW of the ministry of electricity power generation turbines but signing the contract was delayed due to government resignation in November 2019.”

Along with the US deals, Saudi Aramco might also be pushing for cutting the energy ties between Iran and Iraq, as the Kingdom’s Oil Company Aramco is said to be among the companies which are going to collaborate in developing Iraq’s Al Ratawi gas field.

As the country’s biggest gas project, developing al Ratawi has been delayed several times due to a lack of financing.

Saudi Aramco and ACWA Power could be among the players in the Al Ratawi project, Deputy Prime Minister and Finance Minister Ali Allawi said on August 21.

Despite all the efforts made by the US and other Arab nations, Iran has no objection to Iraq expanding its energy relationships with the world.

As Iranian Ambassador to Baghdad Iraj Masjedi told Al-Monitor: “Bilateral relations between countries are basically internal and related to the foreign policy of each country. We do not intend to interfere in an internal matter. Iraq is our friend and brother country, and its leaders recognize their national interests better than anyone.”

The ambassador said the nature of the relationship between Iran and Iraq is unchangeable. “No matter what government is in power in Iraq, the relations between the two countries are so intertwined in different areas that no government can ignore them.”

Iraq could connect its networks with other Persian Gulf Arab countries but no other country can take Iran’s special place among Iraq’s top trade partners.