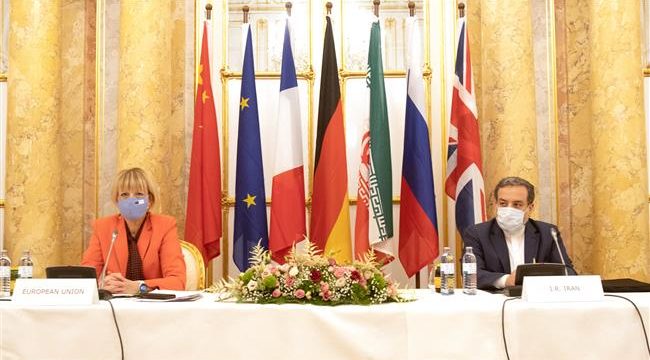 JCPOA Joint Commission: All parties determined to preserve Iran deal despite US pressure

Press TV – The remaining signatories to a 2015 Iran nuclear deal say they will do everything possible to preserve the landmark accord following their first meeting since the United States launched an unlawful push to restore United Nations sanctions against the Islamic Republic.

In a post on her Twitter account at the end of the talks, Schmid wrote that it was “important” that the participants — Iran, France, Britain, Germany, Russia and China — were “united in resolve to preserve” the nuclear deal.

Just finished chairing #JCPOA Joint Commission. Important to see that participants are united in resolve to preserve the #IranDeal and find a way to ensure full implementation of the agreement despite current challenges. pic.twitter.com/uO5bDdTlCA

She added that the parties were also determined to “find a way to ensure full implementation of the agreement despite current challenges.”

Speaking after the meeting, Araqchi also said Iran’s JCPOA partners do not recognize the US as a participating side and “do not regard this country as entitled to use the mechanisms of the JCPOA or Resolution 2231.”

“The convergence among the participants sent an important message to the world about the position of the JCPOA’s members,” he said. “This is, of course, the stance of the majority of the international community. The mood at the UN Security Council is also similar.”

“All JCPOA members and the majority of the world community are against America’s unilateral policies and undermining multilateralism and global institutions in international relations. Everyone is complaining about the measures that the US takes to destroy international bodies,” he said.

The Iranian diplomat added that a number of initiatives have been put forward on ways to safeguard the JCPOA against Washington’s unilateralism, adding, “All signatories are determined not to allow the US to impose its own will [on others] and unilaterally kill a deal that has the support of the international community and the Security Council.”

In turn, Russia’s Permanent Representative to International Organizations in Vienna Mikhail Ulyanov wrote on Twitter that the Vienna meeting “demonstrated that its participants are fully committed to the nuclear deal and are determined to do their best to preserve it.”

Russian Deputy Foreign Minister Sergei Ryabkov also said following the meeting that Moscow considers Washington’s attempt to renew anti-Iran bans “legally void,” and all signatories to the JCPOA similarly refused to recognize the legitimacy of the US bid.

“We are seeing an important process of consolidation of the participants of the JCPOA in their positions rejecting this American scheme. And we are confident that the results of today’s meeting will help our colleagues in New York [at the UN] to work in the right direction,” Ryabkov said.

“We are forced to deal with an administration in the US which rejects common sense,” Ryabkov said, adding that the US stripped itself of the right to have any say on the matter when it voluntarily withdrew from the Iran nuclear deal in 2018.

He rejected US Secretary of State Mike Pompeo’s statement last week, which claimed that UN sanctions against Iran would return on September 20 after being triggered by Washington.

“We regard this American notice as legally null and void. It was formulated without taking into account, or more precisely by completely rejecting, the indisputable fact that the JCPOA and the UN Resolution 2231 [endorsing it] are a single whole. By removing itself from the list of participants of the nuclear deal, the United States thereby deprived itself of the opportunity to enjoy the rights provided for in Resolution 2231,” Ryabkov explained.

Speaking to reporters after the meeting, Chinese representative Fu Cong likewise slammed the US plan to reinstate sanctions against Iran, and said Washington no longer has “the legal ground or legal standing to trigger snapback.”

He added that China believes that Washington was using the mechanism to “try to sabotage or even kill the JCPOA.”

“But the US is stopping at nothing to sabotage other countries’ efforts to provide economic benefits to Iran and this is extremely inhumane under the current COVID circumstances,” the Chinese diplomat added.

He emphasized that the US unilateral sanctions and extraterritorial application of sanctions are the biggest obstacle to the implementation of the JCPOA.

“Delegates expressed willingness to double their efforts to provide economic benefits to Iran and encourage Iran to come back to full compliance but we need to make clear that these two things are two sides of the same coin,” he said.

The United States is trying to invoke the snapback mechanism in the multilateral nuclear agreement despite its withdrawal from the accord in May 2018 in violation of UN Security Council (UNSC) Resolution 2231 that endorses the JCPOA.

The United States’ most prominent Western allies have refused to fall into step with the push, which follows Washington’s humiliating defeat in securing an extension of the UN arms embargo against Iran at the UNSC last month.

The president of the Security Council on August 25 dismissed attempts by the US to reinstate all UN sanctions against Iran, citing a lack of consensus in the 15-member body.