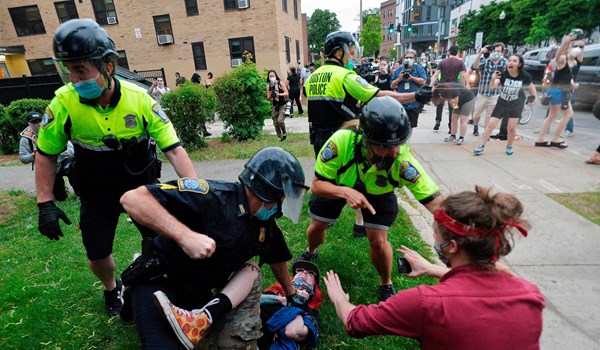 Zarif: “All options on table”, US label of “Law of Jungle”

FNA – Iranian Foreign Minister Mohammad Javad Zarif said the US catch phrase “all options on the table” is tantamount to the law of the jungle, stressing that it is an affront to the international law.

“All options on the table” has long been a staple of US foreign policy,” Zarif wrote on his Twitter page on Sunday.

“It simply means the law of the jungle: disregard for a fundamental principle of int’l law: Non-Use of Force. Now, the Trump regime is using the same threat against Americans. A wake-up call? God willing,” he added.

The US Homeland Security Secretary Chad Wolf said in an interview with ABC’s “This Week” that: “All options on the table” to resolve violent protests in Portland, Oregon, including sending in federal law enforcement assistance.”

In a relevant event, a man was shot and killed Saturday as a large group of supporters of President Donald Trump traveled in a caravan through downtown Portland, Oregon, which has seen nightly demonstrations for three consecutive months.

The pro-Trump rally drew hundreds of trucks full of supporters into the city. At times, Trump supporters and counterprotesters clashed on the streets, with people shooting paintball guns from the beds of pickup trucks and protesters throwing objects back at them, The New York Times reported.

A video that purports to be of the shooting, taken from the far side of the street, showed a small group of people in the road outside what appears to be a parking garage. Gunfire erupts, and a man collapses in the street.

The man who was shot and killed was wearing a hat with the insignia of Patriot Prayer, a far-right group based in Portland that has clashed with protesters in the past.

The Portland Police Bureau announced that officers heard reports of gunfire shortly before 9 pm and found a victim with a gunshot wound to the chest. It was determined that the victim had died. They did not release any information about a possible gunman.

At the scene, police officers blocked off the road and medics attended to a person who appeared to have a chest wound.

The shooting capped a volatile week in the United States that began when the police in Kenosha, Wisconsin, repeatedly shot a Black man, Jacob Blake, prompting new protests against racism and police brutality that included the cancellation of professional sports games.

During the unrest after the shooting of Blake, Kyle Rittenhouse, a 17-year-old Illinois resident, was charged in connection with the fatal shootings of two demonstrators.

Portland has seen nightly demonstrations since the death of George Floyd in police custody in Minneapolis in May. In recent days, right-wing demonstrations have also sprung up in the city, and Trump has repeatedly highlighted the unrest in Portland as evidence of the need for a tougher law-and-order response to the chaotic protests over police violence and racial injustice that have swept through many American cities.

The Trump supporters gathered earlier Saturday in the suburbs and plotted a route for the several hundred vehicles involved in the event that would have kept them on the highways outside the city center. But some of the ralliers headed directly downtown, where counterprotesters confronted some of the vehicles. Some of the conflicts led to fistfights. In one encounter, a vehicle ran over a bike.

While protests in Portland have persisted, their numbers have changed over time. The nightly events began with mass demonstrations after Floyd’s death, then shrank to smaller numbers of people who repeatedly clashed with the police. In July, when the federal government sent camouflaged agents into the city, the protest numbers grew dramatically once again.

In more recent days, the protest crowd has typically numbered just a few hundred people. On Friday, after a peaceful demonstration in front of Mayor Ted Wheeler’s residence, a crowd went out to a police association building, where some of the protesters set fire to the front of the building before the police dispersed the crowd.

The police have made dozens of arrests in recent days as they have chased protesters through the streets, at times knocking them to the ground.

Trump has repeatedly focused on the unrest in Portland, including during the Republican National Convention last week, challenging the city’s leaders to end the chaos. The American president announced in a tweet on Friday that the federal government would go into the city if the mayor were unable to maintain control.

Wheeler in a letter on Friday asked Trump to stay away, saying the earlier federal presence had made things worse.

“Your offer to repeat that disaster is a cynical attempt to stoke fear and distract us from the real work of our city,” he added.