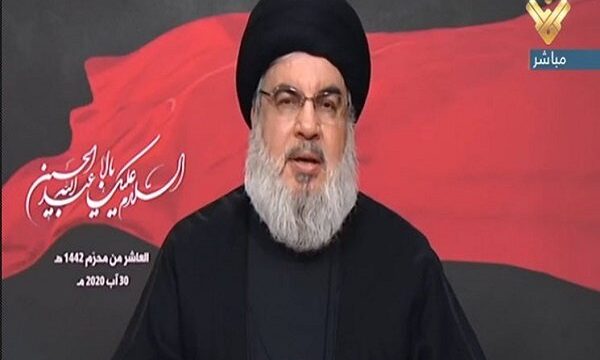 Nasrallah condemns any call for peace with Israeli regime

MNA – The Secretary-General of the Lebanese Hezbollah condemned any call for peace with the Israeli regime.

“We condemn any call for peace with the Israeli regime,” Seyyed Hassan Nasrallah said during a live speech on the occasion of the Day of Ashura on Sunday noon.

“An example of the Israeli supremacist attitude is how it dealt with some Emirati statements lately,” he noted.

“When the Emirates claimed that their peace plan with the Israeli regime will result in halting the joining of Palestinian lands to the Zionists, Netanyahu instantly held a conference and assured that the peace plan will not stop any decision of annexing the lands.”

“The Emirates claimed that they will be receiving drones from the Israeli regime after the peace plan, but Netanyahu instantly held a conference and tweeted that no one in the region is allowed to have drones. So, the Israeli regime did not even wait for a few to deny the Emirati claims. This peace was a free gift from Emirates to Trump in his worst political days and Netanyahu in his worst political days.”

As he continued, ” Netanyahu welcomes UAE’s cancellation of the law of boycotting Israeli goods and economic relations with Israelis.”

He elsewhere said, “Internally we are ready to discuss the Lebanese Sectarian law if all the parts in Lebanon accept that.”

“I have spoken in the past about developing the Taef agreement, I never mentioned initiating a new political system all over again.”

Referring to the mourning month of Muharram and the restrictions caused by the coronavirus pandemic, Nasrallah said, “This year the 10th day of Muharram comes with greater sadness because of the absence of crowds expressing their love and loyalty in fields due to the virus.”

He said, “At a time when rightness gets portrayed as wrong, people must take the initiative to reveal the rightness even if it was through martyrdom.”

Referring to the lessons of Imam Hussein’s sacrifices in the Battle of Karbala, he said, “When oppressors and tyrants put you in front of two choices either war or humiliation, the answer is definitely “Humiliation… how remote!”

“Our region is divided today into two camps, right and wrong. Occupation, confiscating rights and terrorism are in one camp, and the rights of the Palestinian, Syrian, and Lebanese people are in the other camp,” he added.

“Today, on the 10th of Muharram, we as Hezbollah reassure that we will never acknowledge this occupying entity even if the whole world did,” Nasrallah said.

“Right is what these people and the regimes that represent them portray and wrong is what the US regime bluntly portrays from stealth to domination and oppression.”

“The war on Yemen is US-led, whole Saudi and Emirates are the only equipment that the US moves,” he said.

“Victory will definitely be the outcome, it is only a matter of time,” he underlined.