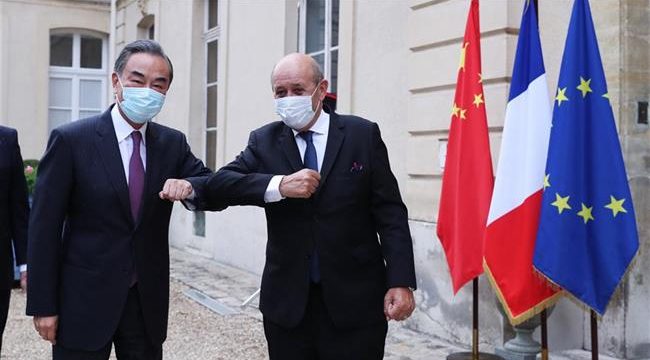 Press TV – In an implied rebuke of US’ unilateral policies, China’s foreign minister says Beijing and Paris should work to promote multilateralism and safeguard major international agreements, such as the 2015 Iran nuclear deal, in the face of unilateralism.

Wang Yi made the remarks in a Saturday meeting with his French counterpart, Jean-Yves Le Drian, in Paris, where he said the two sides “should strengthen coordination and cooperation on international affairs, and safeguard major outcomes of international agreements and multilateral diplomacy, such as the Iran nuclear deal.”

US President Donald Trump, a hawkish critic of the landmark 2015 nuclear deal between Iran and six world powers, officially known as the Joint Comprehensive Plan of Action (JCPOA), unilaterally withdrew Washington from the agreement in May 2018, and unleashed the “toughest ever” sanctions against the Islamic Republic in defiance of global criticism.

Both China and France are among the remaining parties to the Iran deal.

He added, “Without multilateralism, the multilateral mechanism and international order established since World War II will be seriously damaged, and small- and medium-sized countries will suffer a huge impact.”

Wang emphasized that “unilateralism is on the rise today as some countries ignore international agreements and refuse to fulfill their international obligations.”

The Chinese call comes amid yet another illegal US push at the UN Security Council to use a provision in the JCPOA to renew all UN sanctions against Iran, turning a deaf ear to calls by the remaining signatories that Washington is no longer a party to the deal and is in no position to do so.

Trump has made several controversial decisions since he took the oath of office in January 2017, including ones that forced the US out of international treaties in defiance of global outcry.

The Trump administration pulled the United States out of the Intermediate-Range Nuclear Forces Treaty (INF) with Russia last year. The 1992 treaty allows member countries to conduct short-notice, unarmed, reconnaissance flights over the other countries to collect data on their military forces and activities.

Trump has also pulled his country out of the UN culture and education organization UNESCO, the Paris climate accord and the Human Rights Council.

Elsewhere in his remarks, Wang said that maintaining multilateralism was the biggest consensus reached during his trip to Europe, urging China and France, as major responsible countries, to actively promote and practice multilateralism under such circumstances.