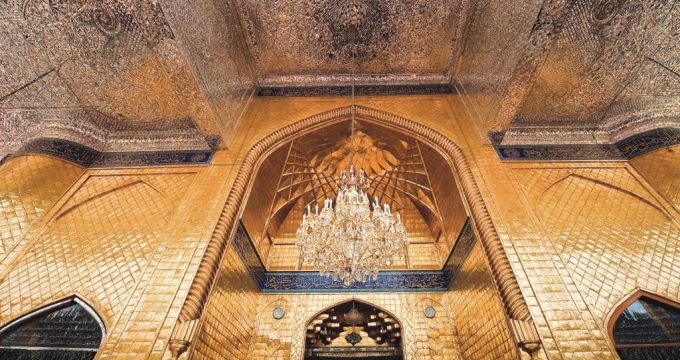 MNA – Tasu’a in the Islamic calendar refers to the ninth day of Muharram. A day before Imam Hussein (PBUH) and his true companions were martyred at the Battle of Karbala. Tasu’a is the commemoration day of a tragic incident.

Heartfelt condolences to all Muslims across the world on the martyrdom anniversary of the Third Infallible Imam of Household of Holy Prophet, Imam Hussein (PBUH).

As part of the annual processions during the first ten days of Muharram to remember Imam Hussein (PBUH) and his 72 true companions, millions of Iranians from all walks of life put on their black dresses and attend nationwide mourning event.

On this day, eulogists and Islamic scholars spend the day recounting the Battle of Karbala occurred in 680 AC when Imam and his companions fought the large army caliph Yazid I, the tyrant of the time.

This year’s Muharram mourning ceremonies differ from previous years which is due to the outbreak of the coronavirus global pandemic, also known as COVID-19. According to the National Coronavirus Combat and Prevention Headquarters, all religious bodies and Husseiniyahs across the country should observe anti-coronavirus and social-distancing protocols strictly.

The event took place in Karbala plain, current Iraq in 680 AC. Imagine tents which are held near the Euphrates. Two armies have settled alongside this roaring river, and it looks like there is war ahead. On one side Imam Hussein (PBUH), the Third Infallible Imam of Household of Holy Prophet, and grandson of the Prophet Mohammad and the other side were the Kufi Army. The Kufis did not allow Imam Hussein’s allies to drink from the river water, and the tragedy begins from here.
Many historians considered that the reason of this war was “Yazid I”, which Imam Hussein (PBUH) did not accept his rule over the Muslims.
Although the incidents of Muharram was not limited just to Tasu’a, many battles have fought between the two armies days before. Tasu’a the 9th day of Muharram is an important day, during which Abbas, Imam Hussein’s brother, who was sent to the Euphrates to bring water was martyred, therefore the Shia Muslims, especially in Iran and Iraq, perform mourning rituals during this day.

Tasu’a is the ninth day of Muharram, one of the important days for Shia Muslims which is related to the event of Karbala, dating back in 61 Hejira. In the ninth day of Muharram, Shemr entered Karbala by a letter written by Ubayd Allah ibn Ziyad, in which, Umar ibn Sa’ad was requested either to show seriousness in contact with Imam Hussein (PBUH) or delegate the commandership of the army to Shemr.

Umar Sa’ad prevented from delegating commandership of the army to Shemr and prepared to wage war against Imam Hussein (PBUH).

With the rush of armies on the day of Tasu’a, Imam Hussein (BPUH) sent his brother Abbas ibn Ali (PBUH) and urged them to give moratorium in order to pray and recite the Holy Quran.

The ninth day of Muharram ‘Tasu’a’ is of paramount importance in view of Shia. As mentioned above, this day is attributed to Abbas ibn Ali (PBUH) and is observed the same as Ashura Day and Shia Muslims across the globe mourn for the hardship and difficulties sustained by companions and Ahl al-Bayt of Imam Hussein (PBUH).

People in Iran and some predominantly Shia Muslim countries mark Tasu’a with mourning through launching chest- and chain-beating religious boards.

According to historical resources, Shemr on the forenoon of ninth of Muharram (Tasu’a) along with 4,000-member military men entered Karbala land and territory, carrying a letter from Ubayd Allah ibn Ziyad addressed to Umar ibn Sa’ad. In this matter, ibn Ziyad had requested ibn Sa’ad either force Imam Hussein (PBUH) to accept allegiance or prepare himself for battle.

Also, Obaid Allah ibn Ziyad in this letter threatened Umar ibn Sa’ad if he disobeys his order, he should separate himself from army and delegate its responsibility to Shemr.

According to the available resources, Umar ibn Sa’ad, after reading the letter, appointed Shemr as commander of infantry of his army. 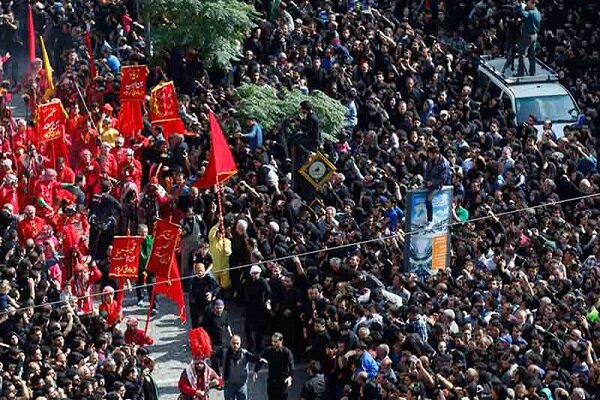 When Shemr was receiving Ibn Ziyad’s letter which had been written to Umar ibn Sa’d, he requested Ubayd Allah for granting safe conduct for his nieces along with Abdulla ibn Abi Al-Mahal, nephew of Umm ul-Banin and then, Ubayd Allah admitted their proposal.

In another narration, it is reiterated that Shemr brought the safe-conduct letter for Hazrat Abbas (PBUH) and his brothers Abdullah, Jafar, and Othman, regarded as children of Ali ibn Abi-Talib (PBUH).

In this case, Hazrat Abbas (PBUH), Jafar and Othman, children of Ali ibn Ali-Talib, went out and said, “what do you want?” Shemr told them, “O’ my nieces, you have been given a safe-conduct and I have received a safe-conduct from Obayd Allah ibn Ziyad for all of you.”

After the reject of the safe-conduct letter, army of Omar ibn Sa’d was ordered to prepare themselves for war. Then, all of them prepared themselves to battle with Hazrat Imam Hussein (PBUH) and his true companions on the evening of ninth of Muharram.

The reason why Shemr called them nieces is because he is a tribe with Umm ul-Banin, the mother of Hazrat Abbas; because Umm ul-Banin was the daughter of Hizam ibn Khalid from the tribe of Bani Kalab and Shemr was also the son of Dhi Al-Jushan from the same tribe.

On the evening of the 9th of Muharram, the movements of Omar Sa’d’s army increased in the desert of Karbala, and Omar ibn Sa’d prepared himself for war with Imam Hussein (PBUH) and ordered his troops to prepare for war.

The commotion and noise of the army arose. Imam Hussein (BPUH) (AS) had sat in front of his tent and was leaning on his sword. Hazrat Zainab (PBUH) heard the noise of the Kufa army and approached her brother and said, “My brother, do you hear the approaching voices?”

Imam Hussein (PBUH) raised his head and said, “I saw the Messenger of God (S) in a dream who said to me: You will come to us [soon].” Imam Hussein (PBUH) said to Hazrat Abbas (PBUH), “O Abbas; My life is your sacrifice; “sit on your horse and go to them and ask what they want and why they came forward.”

Hazrat Abbas (PBUH) with twenty horsemen, including Zuhair ibn Qain and Habib ibn Mazahir, came to the enemy army and asked, “What happened and what do you want?” They said, “It is the Amir’s order to tell you to either pledge allegiance or prepare themselves for battle.” Hazrat Abbas (PBUH) said, “Do not move from your place until I go to Imam Hussein (PBUH) and convey your message to him.” They accepted, so Abbas (PBUH) came to Imam Hussein (PBUH) alone to inform him about the matter.

Imam Hussein (PBUH) said to Hazrat Abbas (PBUH), “If you can convince them to postpone the war until tomorrow and give us respite tonight so that we can pray.” “God knows that I love His prayers and the recitation of his book.”

Abbas made great sacrifices in the Battle of Karbala and was martyred shortly before Imam Hussein on the 10th day of Muharram, which is also known as Ashura.

He is buried in his own shrine in the city of Karbala, which is located within walking distance from Imam Hussein’s mausoleum.

Thousands of Iranians also travel to Iraq on Tasua and Ashura to partake in processions and visit the holy shrines in Karbala as well as in Najaf, where Imam Ali is buried. 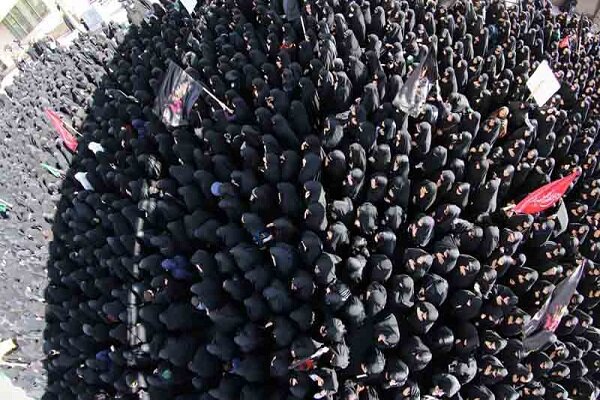 Tasu’a ritual in Iran & Ta’zieh (Passiona Play)
The religious rituals of this day in Iran are in the form of mourning carnivals, which are people wearing black and walking in alleyways and streets in long lines to mourn for Imam Hussein (PBUH) together, these long lines are called Dasteh (group). Each group belongs to a particular neighborhood, alley or mosque. They hold the Alam (sign) in front of each group which is a symbol of Imam Hussein’s army vanguards. Alam is a vast structure designed with colored feathers and lanterns which are moved by strong men.
After the Alam, two person holding two flags, usually black or green, are moving, followed by the group of mourners rehearsing sad poems alongside the Maddah (eulogist) who sings the sad poems whit a specific rhythm about Karbala incidents and Imam Hussein. This is the simplest ritual of Tasu’a. Ta’zieh (Passion Play) is another form of these rituals which is presented as a symbolic performance of the events of the martyrdom of Imam Hussein and his 72 companions.
Among the famous rituals during these days (Tasu’a and Ashura) is donating Iranian food as votive offerings. These foods are cooked in big pots to provide foods for groups of mourners. Some of families offer votive foods among people so their prayers accept by God. 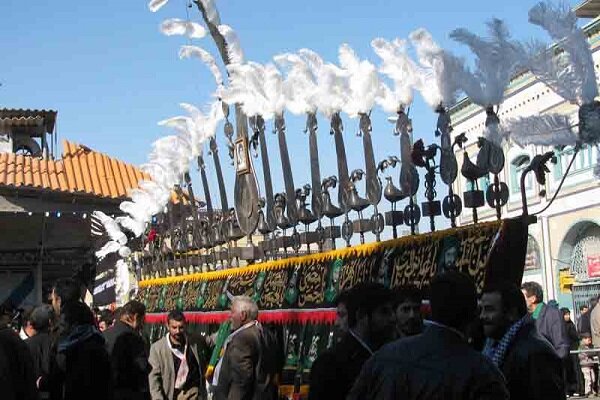