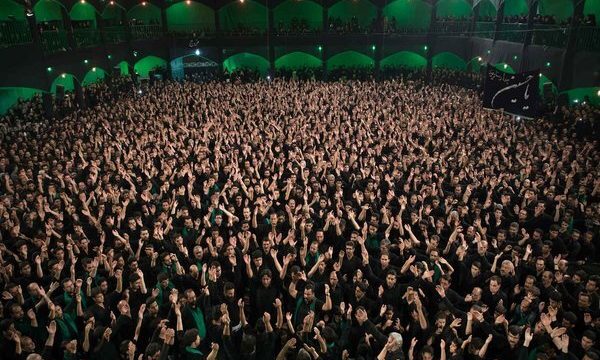 MNA – The Muharram mourning ceremonies in commemoration of Imam Hussein (PBUH) have become a tourist attraction across the central province of Iran, Yazd.

Being the first month of the Islamic New Year, Muharram holds great importance in Islam. The Battle of Karbala took place on Muharram 10th (AD 680/AH 61), when the forces of the second Umayyad caliph martyred Imam Hussein ibn Ali, a grandson of Prophet Muhammad (PBUH).

Muharram rituals are held all around the world where there are Shia Muslims. Shia Muslims start mourning from the first night of Muharram and continue for ten nights. Shia Muslims, hold special ceremonies during the first ten days of the lunar month of Muharram to commemorate the martyrdom anniversary of Imam Hussein (AS) and his 72 loyal companions.

Like other parts of the world where Shia Muslims hold some mourning ceremonies for commemoration of Imam Hussein, Muharram mourning ceremonies are also held in all cities of Iran. During the days of Muharram mourning, the appearance of the cities and towns in Iran change dramatically and the streets are shrouded with black flags and banners. These days most people wear black or dark colors as a sign of their grief. Muharram and Ashura, the 10th day of Muharram, are from the most significant events in Iran.

People in Yazd, a historic city in central Iran that has been already inscribed on the UNESCO’s World Heritage List, have performing the centuries-old ritual of mourning Imam Hussein’s martyrdom anniversary so impressively that foreign tourists have begun to arrange trips to the ancient city in the lunar calendar month of Muharram.

Yazd Muharram’s rituals are well-known countrywide and have been held for centuries in a fixed style, which hundreds of men, all clad in black, congregate in hussainiyas (places used for religious mourning ceremonies) to beat on their chests according to the rhythm of a sung eulogy.

Mourning ceremony entitled “Mahale Gardi” is one of the traditional rites and rituals of people in Mehriz, Yazd province, which dates back to more than 100 years ago. “Mahale Gardi” ceremony starts as of the second day of Muharram month in a way that lovers of Imam Hussein (PBUH) pass from the old neighborhoods and invited them to take part in mourning ceremony in Baghe Bahar hussainiya.

“Nakhl Gardani” is one of the ritual traditions that people in many cities in Iran. The most important Nakhl-Gardani ceremonies are held across Yazd Province.

Nakhl symbolizes the coffin of Imam Hussein. It is a scaffold shaped like a tree leaf. Mourners cover Nakhl, which is largely made of wood, with black fabrics and hang hundreds of swords and daggers from it.

Other ceremonies such as Rowzeh-Khani (religious sermon), Sineh-Zani (beating the chest as a sign of grief) and slaughtering cattle are held alongside Nakhl-Gardani.

Yazd always attracts the special attention of foreigners due to its unique Muharram rituals. Hundreds of foreign and native tourists go to Yazd to watch its distinguished Nakhl Gardani every single year.

In the famous Nakhl Gardani ritual in Yazd, hundreds of men use their muscles to carry the giant wooden structure around the Amir Chakhmaq Square.

Almost all the other male mourners gather in the center and the women on a bigger circle around them and on the rooftop of the buildings nearby.

There are some guys standing on top of the Nakhl, among them an old Seyyed (descendant of prophet) chants ‘Ya Hussein’ and guides the passionate mourners carrying it, so that no one is left under.

They turn the Nakhl several times around the square and at the same time the people cry out religious chants.

The Nakhl becomes even heavier when is decorated by swords and daggers. But people hold and move it amazingly in harmony.

The city of Taft in Yazd Province boasts the largest Nakhl of Yazd province. Millions of mourners attend this ceremony during Ashura every year.

After the Nakhl-Gardani ritual, people people continue mourning and listening to the religious sermons until sundown. After the night prayers, they hold the Sham-e Ghariban.

Sham-e Ghariban refers to the evening and night of Ashura and literally means “the night of the forsaken.” People mourn and lament the martyrdom of Imam Hussein (AS) and the tribulations and tragedies that befell the Ahl-ul-Bayt (AS). It has become a tradition to light candles on this night.

According to the Coronavirus Combat and Prevention Headquarters, gatherings and attendance in crowded places could lead to the spread of the disease, so some of Muharram mourners in the province took a different approach this year.

In this regard, mourners in Iran’s central Yazd province have decided to allocate the cost of their Muharram rituals to the poor and needy families this year.