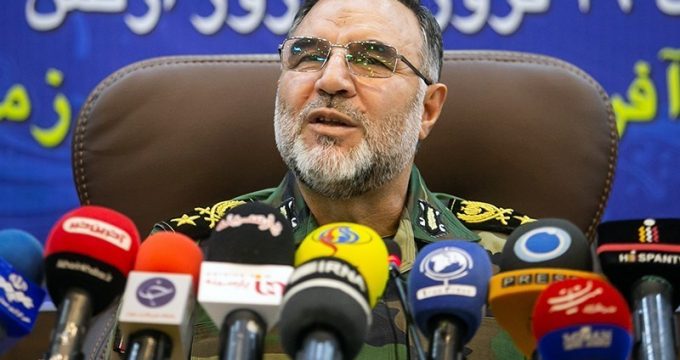 MNA – Commander of the Iranian Army Ground Force said on Wednesday that having access to modern equipment, the Iranian defense sector is now standing on its feet independent from any other countries.

Brigadier General Kiomars Heidari, in his remarks in Qazvin province, added that Iran is equipped with modern technology in production, equipment and maintenance sections of its defense sector.

He noted that, along with other Iranian forces, the Army Ground Force is ready to deter any foreign threats in the least possible time.

Brigadier General Heidari added that the Iranian home-grown missiles are unique considering their capabilities and today, the deterrence power of the Islamic Republic is beyond expectations.

The Iranian commander also referred to the rejection of the US anti-Iranian resolution by the UNSC, noting that the world does not tolerate the US behavior and Americans are getting more and more lonely incrementally due to their spirit of arrogance, aggression and terrorism.

The most recent failure of the US against Iran occurred Tuesday, when the Indonesian Ambassador to UN and the current president of the UN Security Council, Dian Triansyah Djani, announced the Security Council was “not in the position to take further action” on the US snapback bid against Iran.

Stating that the US objective is to destroy Resolution 2231 and the JCPOA, Iran’s Permanent Mission to the United Nations said on Wed. that the deliberations in the UN Security Council showed the US isolation once again.

The US Secretary of State Mike Pompeo said on Friday that Washington delivered a letter to the UN for snapback invocation against Iran to bring back sanctions in 30 days.