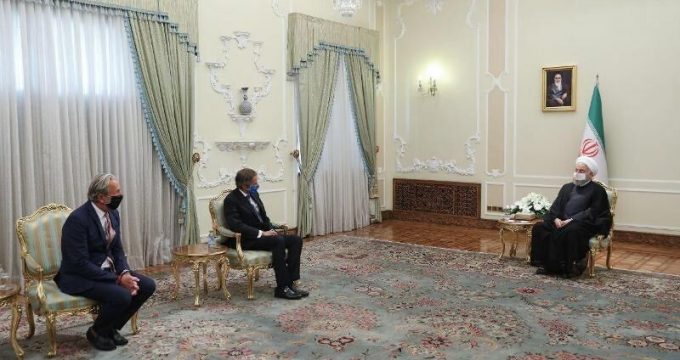 Iran ready to coop. with IAEA under ‘safeguards’: Rouhani

MNA – Iranian President Hassan Rouhani said that Islamic Republic of Iran is ready to cooperate with the International Atomic Energy Agency (IAEA) within the framework of ‘safeguards’.

Speaking in his meeting with IAEA Chief Rafael Grossi on Wed. evening, Rouhani stated, “In view of Iran, IAEA is of paramount importance and like in the past, the Islamic Republic of Iran is ready to cooperate with IAEA within the framework of safeguards.”

The Islamic Republic of Iran attaches great importance to its relations with IAEA, Rouhani reiterated.

He expressed hope that bilateral cooperation between Iran and IAEA will be strengthened day by day and added, “In addition to its technical and specialized duties in the field of ‘safeguards’ and ‘Additional Protocol’, which Iran voluntarily implements it, International Atomic Energy Agency (IAEA) also has an important responsibility in relation with JCPOA and preservation of this multilateral document inked between Iran and six world’s major powers in the Austrian capital Vienna on mid-July 2015.”

Rouhani pointed to IAEA’s detailed and expert reports with regards to the implementation of JCPOA during the cooperation of seven countries involved in nuclear talk and added, “JCPOA was a very important agreement for Iran and 5+ 1 Group which created peace and security both in the region and world.”

US withdrew from JCPOA in May 2018 unilaterally, Rouhani said and reiterated, “With more than two years since the US has withdrawn from JCPOA, Americans are well aware that their action taken in this regard was wrong.”

Elsewhere in his remarks, Rouhani said, “Today, the significance of JCPOA is tangible well for members of UN Security Council (UNSC) and United States has not achieved success through international organizations since it (US) withdrew from JCPOA.”

It is hoped that the US one day will realize that the era of unilateralism is over, Rouhani maintained.

The director-general of the IAEA, for his part, expressed his satisfaction with the agreement made with the Atomic Energy Organization of Iran (AEOI) during his visit to the Islamic Republic of Iran and emphasized the need for deepening and expanding further cooperation between Iran and IAEA.

JCPOA was really a great achievement for all parties involved in the nuclear talk so that IAEA burdens great responsibility to maintain and preserve it (JCPOA), Grossi stressed.