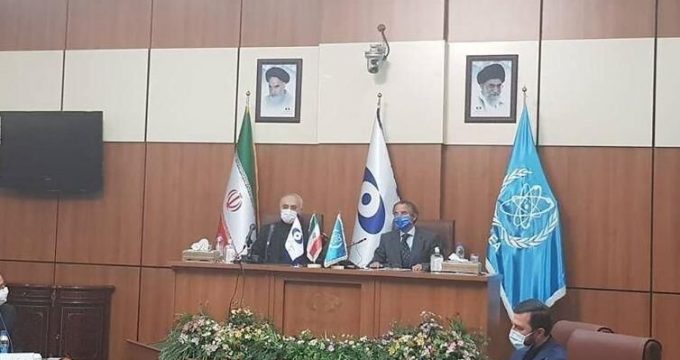 Speaking at a presser after the meeting, Salehi said, “Our conversation today was constructive. It was agreed that the agency will carry out its independent and professional responsibilities, and we will fulfill our commitments.”

“A new chapter of cooperation between Iran and the International Atomic Energy Agency will start.”

Salehi said a new statement will be released later based on the today and previous talks held with the IAEA chief.

“We are moving forward and we are hopeful that the prospective matters are met properly.”

Noting that the enemies who try to interrupt Iran’s cooperation with the agency will not remain silent, the Iranian nuclear chief said, “We will exert every effort to foil the enemies’ malevolent measures.”

“The Islamic Republic has managed [the issue] so far, and it will do so in the future.”

Grossi arrived in Tehran on Monday evening on his first visit to the country since taking office in December to hold talks with senior Iranian officials. He was welcomed by the AEOI spokesman, Behrouz Kamalvandi, upon his arrival.

The visit takes place over two months after the IAEA Board of Governors passed a resolution on June 19, put forward by Britain, France and Germany – the three European signatories to the landmark 2015 nuclear agreement, officially known as the Joint Comprehensive Plan of Action (JCPOA).

The resolution, the first of its kind since 2012, urges Iran to provide the IAEA inspectors with access to two sites that the trio claims may have been used for undeclared nuclear activities in the early 2000s.

The Islamic Republic rejected any allegations of non-cooperation with the IAEA, insisting that it is prepared to resolve differences with the nuclear agency.