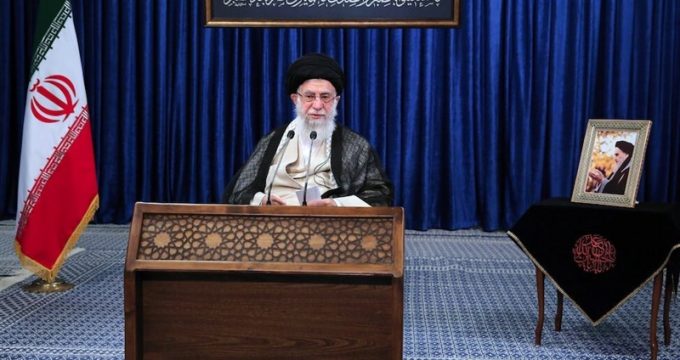 Tasnim – Leader of the Islamic Revolution Ayatollah Seyed Ali Khamenei slammed the US government as a model of complete failure, saying human values like health, justice and security are being trampled on in the United States more than anywhere else.

Ayatollah Khamenei on Sunday attended a videoconference with the members of President Hassan Rouhani’s administration on the first day of the National Government Week.

In remarks at the online meeting, Ayatollah Khamenei described the US government as a model of true failure, pointing to the great social inequality in the US and the high number of hungry and homeless people in the US society.

The Leader also called on the Iranian administration to push for a boost to domestic production and avoid the “strategic mistake” of linking the economy to foreign developments.

“The Government Week is an occasion for reporting this year’s governmental services and examining weak and strong points. Speak directly to the people. Tell them about both your achievements and shortcomings, both what you were able to achieve and what you should have done but didn’t,” Ayatollah Khamenei added.

“Try to finish projects the administration promised to do: projects to construct 600,000 homes, projects of the Ministry of Power and Energy, construction of refineries, measures for knowledge-based companies and actions for combating Coronavirus. All should be pursued seriously.

“National production is key to employment, welfare, reducing inflation and increasing the power of national currency. An obstacle to production is unneeded imports such as luxury products. Last year, half a billion dollars were spent to import luxury US mobiles. The government must stop this.”

The Leader further said, “The US model for running society is a failed model. Human values such as health, justice and security are trampled on in the US the most. They admitted in their electoral campaigns that one out of five US children is hungry. Plus, the rate of insecurity and crimes is very high in the US.

“Murder, warmongering and creating insecurity are common actions carried out by the Americans in Syria, Palestine, and Yemen, and before that in Iraq, Afghanistan and areas such as Vietnam and Hiroshima.”

Ayatollah Khamenei added that the fact that “the US is headed by people who are a source of humiliation for that country is another sign of the defeat of Western models and the decline of Western civilization in the world.”