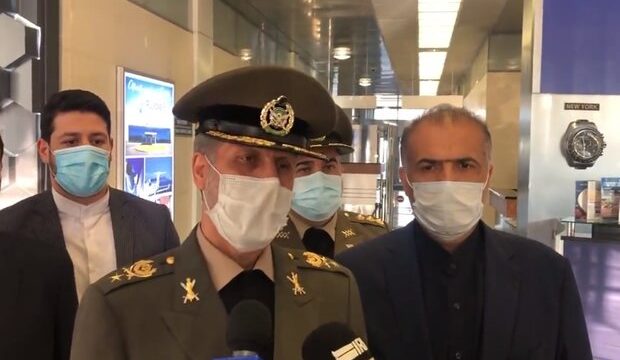 MNA – Iranian Minister of Defense Brigadier General Amir Hatami said that military cooperation between the Islamic Republic of Iran and the Russian Federation is ‘positive and progressive’.

He made the remarks while speaking to reporters on Sat. upon arrival to the Russian capital Moscow at the head of a high-ranking military delegation.

The two countries of Iran and Russia have vast military and defense cooperation with each other, one of which can be referred to as a joint military exercise which was held in the north of Indian Ocean between the three countries of Iran, Russia, and China a couple of months ago, he stressed.

This year, trilateral military exercise between Iran, Russia, and China has been severely affected by the spread of coronavirus global pandemic, he said.

In response to another question on the possibility of renewal of such military exercise between the three countries, Amir Hatami added, “We are interested in holding military exercise according to the coronavirus terms and conditions as well as pertinent health protocols exist in this regard.”

Elsewhere in his remarks, the Iranian minister pointed out that the two sides will discuss regional, bilateral and international issues on the military and defense cooperation.

The two countries of Iran and Russia enjoy good condition in terms of military technologies and progresses, Hatami highlighted.

In this visit, Brigadier General Amir Hatami will hold talks with the Minister of Defense of the Russian Federation Sergei Shoigu and also other senior officials of this country.

The International Military-Technical Exhibition and Forum of Russia has been held every year in this country since 2015 at the order of Russian President, where latest achievements of the Russian military and defense industry are showcased. This international exhibition and forum is attended by senior defense-military officials as well as experts and specialists from different countries.

Strengthening and improving Tehran-Moscow defense cooperation in bilateral, regional and international fields will be the most important goals behind visit of Iranian Minister of Defense to Moscow.