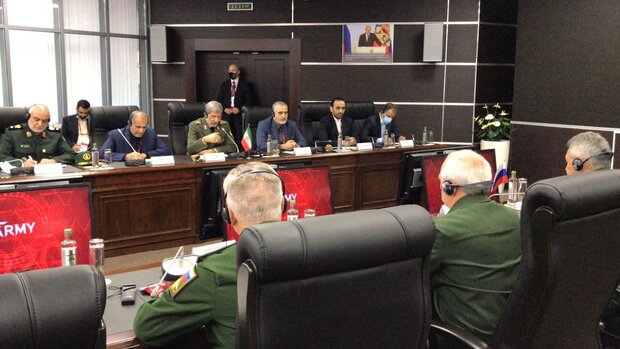 MNA – The Russian Defense Min. Sergey Shoygu referred to the join strategical, regional and international goals and interests between Tehran and Moscow, underlining the developing mutual defense cooperation between the two sides.

He made the remarks in a meeting on Sunday with Iranian Defense Minister Brigadier General Amir Hatami, held on the sidelines of the Army-2020 forum in Russia.

He stressed the need for continuing regional cooperation to establish peace and stability in the region, as well.

The Russian minister added that Russian-Iranian cooperation is consistently developing and gradually recovering from the created restrictions due to the coronavirus pandemic.

Shoygu noted that despite the difficult situation under the coronavirus pandemic, contacts between Moscow and Tehran remain quite intense.

The Russian minister said that the epidemiological situation is gradually returning to normal and the two sides are returning to holding significant multilateral events.

He added that at the Army 2020 forum, the Iranian visiting delegation has the chance to get acquainted with the latest Russian weapons.

The Iranian defense minister, for his part, appreciated the positive and constructive positions of the Russia against the recent US’ anti-Iranian resolution.

“Meetings between the two countries are ongoing at a high and satisfactory level,” he added.

Hatami named expansion of Tehran-Moscow ties as ‘necessary and inevitable’.

“In recent years, Iran and Russia have launched a joint and purposeful effort to counter the unilateralism and bullying policies of the US and the Trump administration in the region,” he noted..

“The realistic response of the UN Security Council and the rejection of the recent US anti-Iran resolution on extension of arms embargoes against Iran, once again, brought a major defeat for the US and its regional allies and proved the global opposition to unilateralism,” he underlined.

“JCPOA parties’ reaction to activation of trigger mechanism and re-imposition of sanctions on Iran was another harsh response, rejecting America’s excessive demands.”

He added that the joint strategies applied by Tehran and Moscow in resolving regional affairs can bring peace and stability to the region, despite the US unilateralistic policies.

Organized by the Russian Defense Ministry, ARMY-2020 is underway on August 23-29 at Kubinka Air Base, Alabino Military Training Grounds.