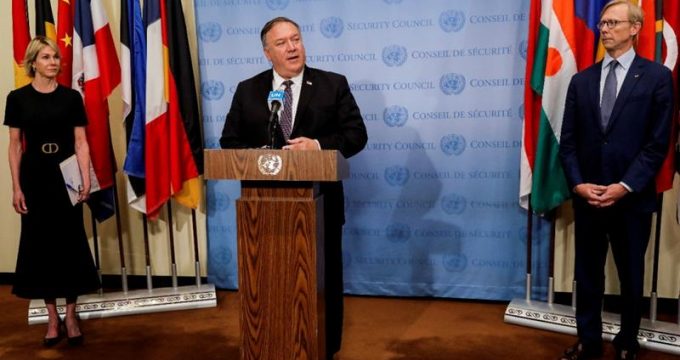 Iran’s coverage: US isolated as allies and opponents reject its bid to snapback UN sanctions on Iran

Five other members of UNSC declare US anti-Iranian demand illegal

The missions of South Africa, Tunisia, Niger, Saint Vincent and the Grenadines, and Vietnam in letters to the United Nations Security Council called the US demand on snapback invocation against Iran illegal.

The European Union (EU) said in a statement on Friday that the next meeting of the Joint Commission of the Joint Comprehensive Plan of Action (JCPOA) will be held in Vienna on September 1.

A group of Iranian lawmakers put forward a motion for an automatic withdrawal from the 2015 nuclear deal in case the activation of snapback mechanism in the JCPOA would re-impose the UN sanctions on Tehran.

President Hassan Rouhani paid tribute to Iranian physicians and medical society for their courageous battle in the war against the coronavirus pandemic, hailing them as heroes protecting the lives of people.

Iran marks the national day of Avicenna, the prominent Persian philosopher and physician on August 22.

Permanent Representative of Russia to Vienna-based international organizations wrote in a tweet that the director-general of the International Atomic Energy Agency “may visit” Iran next week.

Tehran to response harshly to any return of arms embargo: Iran UN envoy

Describing Washington’s claim to invoke the ‘snapback’ mechanism as baseless, Majid Takht Ravanchi warned that Tehran would respond harshly to any return of arms embargo.

Iran’s Health Ministry spokeswoman Sima Sadat Lari said on Saturday that some 126 more Iranians have died from coronavirus disease (COVID-19) over the past 24 hours bringing the total deaths to 20,502.