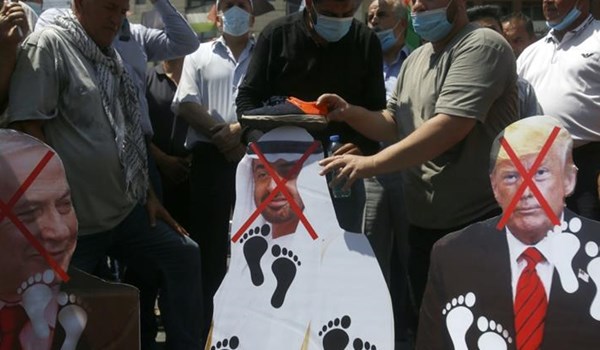 FNA – Iran’s Jewish community in a statement on Wednesday deplored the recent normalization deal between the UAE and Israel, warning Abu Dhabi that the betrayal will yield no result but disgrace for them.

“The Jewish community of Iran condemns the UAE’s shameful agreement to normalize ties with the fake and devil Zionist regime, mediated by the Great Satan (the US), and declares that this betrayal by the ignorant people who are nothing more than milking cows, as said by their masters, will double pressure and oppression on the oppressed people and will yield nothing but disgrace for the conspirators,” the statement said.

It added that the move will further make the freedom-seekers in the world to strengthen struggle against the Zionist regime and defense for the Palestinian people’s rights.

In relevant remarks on Saturday, representative of the Iranian Jewish community at the parliament Siamak Mareh Sedq underlined failure of the recent agreement between the UAE and Israel to normalize relations.

“Similar to the suppression of the resistance in Yemen, Syria and Lebanon the move started by the Persian Gulf littoral Sheikhdoms will fail,” he added.

US President Donald Trump on Thursday announced a deal brokered by his government between Isreal and the UAE which he said would lead to full normalization of ties between the two.

Palestinians have reacted with shock and dismay after Trump unveiled an agreement between the United Arab Emirates and Israel to normalize ties.

The deal pledges full normalisation of relationships between the two countries in the areas of security, tourism, technology and trade in return for suspending Israel’s annexation plans in the West Bank.

Both the Palestinian leadership and public were caught by surprise when the announcement came on Thursday.

“We absolutely had no prior knowledge of this agreement,” Ahmed Majdalani, the Palestinian Authority’s (PA) minister of social affairs, told Al-Jazeera, adding, “The timing and speed of reaching this agreement were surprising, especially that it came at a critical moment in the Palestinian struggle.”

Former PA minister Munib al-Masri noted Sheikh Zayed bin Sultan Al Nahyan, who ruled Abu Dhabi for more than 30 years before his death in 2004, had always been a strong supporter of the Palestinians.

“The late Sheikh Zayed was a dear brother to me, I knew how much he was proud of his support for Palestine… I never imagined that in my lifetime I would see the day in which the UAE would simply sell the Palestinians out for the sake of normalisation,” al-Masri said, noting, “It’s very shameful. I can’t believe it until now.”

Other Palestinian officials announced though the news came abruptly, it was not much of a surprise.

“We were not surprised that much because the Emirati army was never on the borders ready to fight Israel,” said Mustafa al-Barghouti, leader of the Palestinian National Initiative and member of the PA parliament.

“We’ve been seeing recent strange moves by the UAE such as sending direct flights to Israel, and there were leaks of secret accords between the two in terms of scientific and economic cooperation. It is clear that these were preliminary steps to absorb yesterday’s shock,” he added.

The PA and all Palestinian factions, including Hamas and the Islamic Jihad, issued official statements denouncing the UAE-Israel agreement. Palestinian leaders who spoke to Al-Jazeera called it a “stab in the back”.

“We already knew that there has been normalisation going under the table, but to formalise and legalise it that way at this critical moment is shocking. It’s a stab in our back and the back of all Arab nations,” stated Majida al-Masri, former PA minister of social affairs.

Al-Barghouti emphasised the deal “doesn’t introduce any change or progress, it’s far from being genuine peace”.

“This is an attempt to enforce the ‘Deal of the Century’ that aims to liquidate Palestinian national rights, it represents a denial of Palestinian, Arab and Islamic rights,” he continued.

Palestinian leaders stated the deal was “a free gift to Israel” and was made to help the re-election of Trump and Israeli Prime Minister Benjamin Netanyahu.

“The UAE’s position, in terms of its timing and essence, can only be understood as giving Israel leverage for free,” said Wasel Abu Yousef, member of the PLO’s Executive Committee and leader of the Palestine Liberation Front, adding, “There’s no reasonable justification for it except that it gives more power to the occupation and increases its crimes against the Palestinians.”