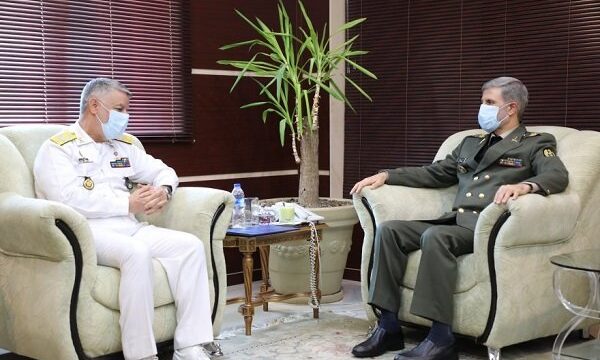 MNA – Iranian Defense Min. Brigadier General Amir Hatami said that his ministry is determined to support the Army Navy and Navy of the IRGC with improving their naval combat power.

In his meeting with Iran’s Navy Commander Rear Admiral Hossein Khanzadi, Hatami said, “Considering the importance of waterways in various sectors such as security, economy and the traffic of merchant ships and oil tankers; ensuring the security of water routes is an inevitable necessity.”

“Cooperation between Iran Nay and Navy of the Guardians of the Islamic Revolution (IRGC) is considered as a reliable support in fight against any aggressions and in preserving the deterrence power of the Islamic Republic of Iran in international waters,” he underlined.

“Today, the Iranian Navy has the ability to use advanced equipment and weapons in the field of naval combat to have a powerful presence in maintaining security [ in the region], from the shores of the Persian Gulf and the Sea of Oman to the Indian Ocean,” he said, “Wherever there is a need for ensuring security in international waters, Iran Navy can be present.”

Iranian Navy has upgraded its position and role into a strategic force in the region, Hatami added.

Hatami said that his ministry is determined to improve the naval combat power of Iranian Navy and Navy of IRGC.

For his turn, Khanzadi noted that thanks to its achieved experiences during the imposed war with Iraq and under the US sanctions, Iran Navy seeks to improve its capabilities in cooperation with the domestic defense industry.