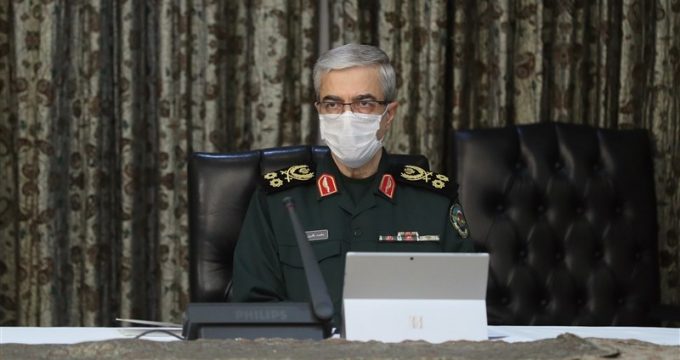 MNA – Iran’s Chief of Staff Major General Mohammad Bagheri said that the defense industry is a strong support for the armed forces to defend the independence and territorial integrity of the country.

He made the remarks in a message on the occasion of Defense Industry Day.

Stating that he defense industry is a strong supporter for the armed forces in defending the independence and territorial integrity of the country and protecting the achievements, values and ideals of the Islamic Revolution and Establishment, Bagheri said,” The country’s defense industry has taken great strides towards self-reliance and self-sufficiency through the diligent and continuous efforts of specialized and expert forces.”

“So that the country’s defense industry in manufacturing and production of advanced and modern military products such as fighter jets, drones, ballistic and precision missiles, radars, satellites, submarines, helicopters, tanks, and other defense needs have become an inspiring model for the prosperity of other production sectors, especially in the field of economy and industry,” he added.

Referring to the disgraceful failure of the United States to pass a resolution extending the arms embargo on Iran, Bagheri said, “Undoubtedly, the development of Iran’s defense industry with complete independence is due to the tireless efforts of the Islamic Revolution forces, which with expertise, commitment and self-confidence have made Iran self-sufficient in achieving advanced defense technologies.”

“The country’s defense industry has made the enemies of the country, especially the US, disappointed” he added.

Bagheri stressed that the defense industry is “a symbol of national authority against the enemies of Islamic Iran.”