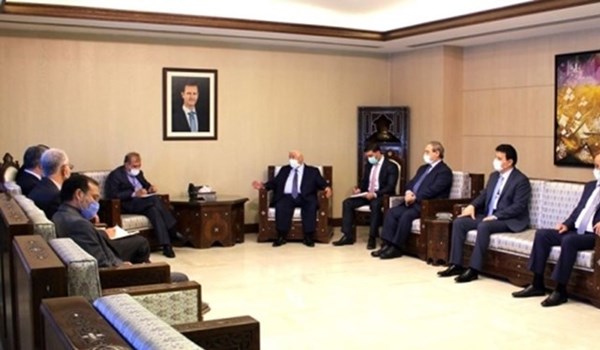 FNA – Senior Assistant to Iran’s Foreign Minister for Special Political Affairs Ali Asqar Khaji and Syrian Foreign Minister Walid al-Muallem in a meeting in Damascus on Monday conferred on the latest developments in the region and the world.

The Syrian foreign ministry in a statement released on its official Facebook page said in addition to the regional and international issues, the two high-ranking officials also discussed bilateral ties.

The two sides expressed pleasure in continued progress in strategic relations between Iran and Syria in different fields, and stressed the need for exchange of experiences to strengthen the two nations and confront common challenges, including the coronavirus epidemic and the US-imposed economic terrorism, it added.

They also agreed to continue coordination and consultations on different developments, the statement said.

Khaji had also earlier today met and held talks with Syrian President Bashar al-Assad on the latest developments in Syria.

The meeting took place in the presence of Iran’s ambassador to Damascus and Muallem in the Presidential Palace on Monday.

Discussion on the cooperation of the countries supporting the Astana process on the Syrian crisis was among the issues of this meeting.

The two sides also discussed developments in the region, including the UAE-Israeli tie normalization and how to deal with it in the region.

Khaji arrived in the Syrian capital on Monday morning to meet with Syrian officials.