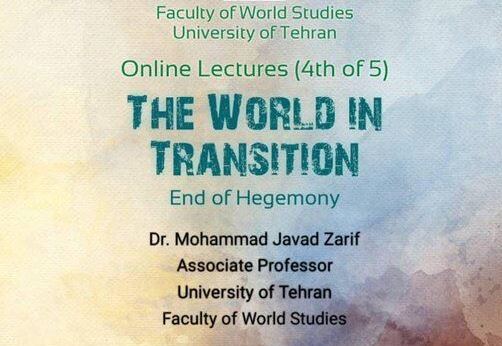 Zarif to deliver speech on ‘End of Hegemony’

IRNA – Foreign Minister and Lecturer of Faculty of International Studies affiliated to Tehran University Mohammad Javad Zarif is scheduled to deliver a lecture on ‘End of Hegemony’ on Monday in the context of a series of online lectures with the theme of “The World In Transition”.

It will be the fourth webinar lecture being presented.

Earlier, addressing the opening of his speech in the first episode, he outlined many concepts prevailing the global political systems so far and said each of them has given way to the other in the course of time.

Recalling the previous changes in the world, he said that “we have seen the emergence of drastic changes and wars” in the international community.

Referring to “extremist unilateralism” as one of these concepts, he said that “all there are conceptual contexts the world experienced about the emerging new world.”

In his third speech, Zarif described the Joint Comprehensive Plan of Action – JCPOA – as the product of transition from negative-sum to positive-sum approach.

He also termed Daesh as the product of invasion and occupation.

Western monopoly on international relations is decreasing, he said, adding that the reason is the creation of global challenges and opportunities.

The West alone is unable to deal with the global challenges and cannot protect the environment, security, and social cohesion, he underlined.

The high-profile diplomat went on to say that the West is no longer the only role player in the world.