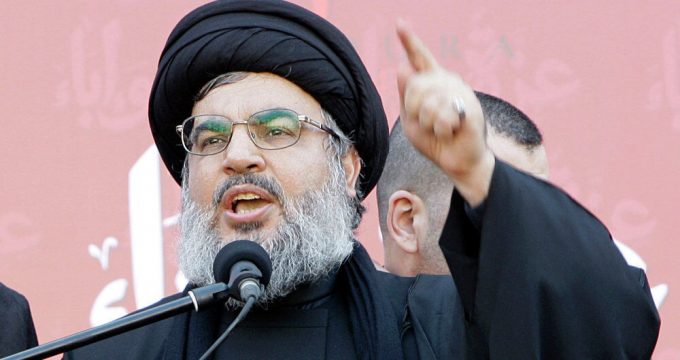 Hezbollah will respond if Israel behind Beirut blast, says Nasrallah

Reuters – Hezbollah leader Sayyed Hassan Nasrallah said on Friday that his group would wait for results of an investigation into the Beirut port explosion, but if it turns out to be an act of sabotage by Israel then it would “pay an equal price”.

The leader of the powerful Iran-backed Shi’ite Muslim group said in a televised speech that the two theories under investigation were that either an accident due to negligence, or sabotage caused the explosion of warehoused ammonium nitrate.

Israel has denied any involvement in the Aug. 4 blast that killed 172 people, injured 6,000, damaged swathes of the city and left 300,000 homeless.

Lebanon’s president has said investigators were looking into negligence, an accident or “external interference”.

Nasrallah said that among sabotage possibilities, was a deliberate fire or the planting of a small bomb.

“Who could be behind an act of sabotage? It could be this side or that, and it could be Israel, which nobody can deny,” he said.

Hezbollah was waiting for the Lebanese probe’s results and if it found “this was a terrorist sabotage operation, and that Israel had a role, then not only Hezbollah will respond. The entire Lebanese state … must respond,” he said. “Israel will pay a price the size of the crime if it committed it.”

Hezbollah, which exercises sway over government in Lebanon, has fought many wars with Israel.

Lebanon’s Prosecutor General has pressed charges against 25 people, including senior port and customs officials, a judicial source said on Friday.

Nasrallah spoke shortly after Iranian Foreign Minister Mohammed Javad Zarif said while in Beirut that the international community should help Lebanon rather than impose its will on the country.

“It is not humane to exploit the pain and suffering of the people for political goals,” Zarif said, adding that Lebanon should decide on its future.

International humanitarian aid has poured in but foreign states have linked financial assistance to reform of the Lebanese state, which has defaulted on its huge sovereign debts.

Iran is seen as a major player in Lebanon through backing, arming and funding Hezbollah, established by the Revolutionary Guards in 1982. The movement is classified by the United States as a terrorist group.

Zarif met President Michel Aoun who also met on Friday with U.S. and French officials in a diplomatic drive that has focused on urging Lebanon to fight corruption and enact long-delayed reforms to unlock foreign financial aid to resolve the worst economic crisis in its history.

Lebanese had been staging angry protests against their leaders who they blame for Lebanon’s many woes even before the blast, which officials have blamed on more than 2,000 tonnes of ammonium nitrate stored for years without safety measures.

The explosion sharpened anger at the authorities.

“We can’t live like this. The West has to pressure our leaders to save us,” said Iyaam Ghanem, a Beirut pharmacist.

Victims and their representatives told reporters that only an independent probe would deliver justice, appealing to the U.N. Security Council for an international investigation.

“Is it acceptable that people find their homes shattered, their families killed, their hopes and their dreams killed, with no justice?” asked Paul Najjar, whose three-year-old daughter Alexandra died in the blast.