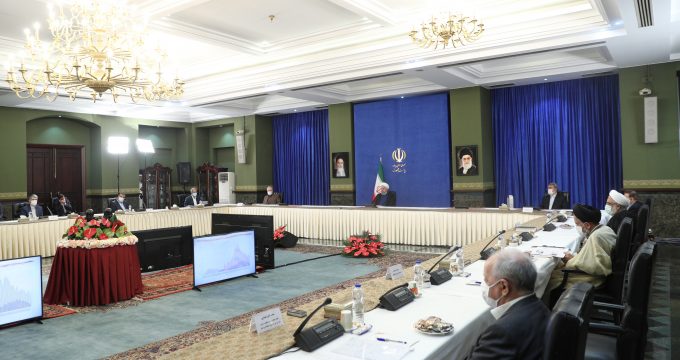 US’ historic failure in UNSC yesterday recorded in history of our fight against arrogance: Rouhani

President.ir – Given the unfamiliarity of coronavirus and the long-term nature of COVID-19 disease, long-term planning and change in lifestyle are necessary for combatting the virus, said the President, adding, “In this path, people should trust the Ministry of Health, the country’s specialists and the decisions of the National Task Force for Fighting Coronavirus”.

Speaking on Saturday at the meeting of the National Task Force for Fighting Coronavirus, Dr Hassan Rouhani stated that we must all act united and sympathetic in the fight against this disease, and said, “Strengthening, completing and developing the infrastructure of the Ministry of Health is the first task of the government in this situation”.

“Fortunately, in many provinces, such as Khuzestan, Kurdistan and West Azerbaijan, we have seen good performance in fighting coronavirus, and a declining trend has begun in these provinces,” he said, expressing hope that this trend would continue in other provinces as well.

Pointing out that the issue of violation of health protocols was raised in the meeting of the National Task Force for Fighting Coronavirus, Dr Rouhani said, “Punishments for administrative violations in businesses have been determined by the task force and will be announced by the responsible agencies”.

Dr Rouhani also said, “All the facilities of the country, including the Ministry of Science, governor generals, medical universities and all responsible agencies, should be mobilised in the best way, so that we can hold the entrance exam with observing health protocols”.

Dr Rouhani said that the UAE has Muslim people, but its rulers have taken a wrong path, adding, “They thought that if they approach the Zionist Regime, their security and economy would be ensured, while this is wrong and 100% condemned, and it is a clear betrayal to the Palestinian people, the cause of al-Quds and Muslims”.

The President added, “It is a shame that while the Zionist Regime is seeking to seize another part of the Palestinian territory and some countries have moved their embassies in violation of international regulations, a Muslim country makes this move to please the ruler of another country who is going to participate in the elections in the coming months”.

Dr Rouhani emphasised, “The rulers of the UAE should know that if they think they can get closer to the enemies of Islam and Iran, they can buy security for themselves, they have gone in the wrong direction”.

The President said, “Saddam Hussein once asked Iran to remain silent so that it could invade Kuwait, Saudi Arabia and the UAE and occupy these countries, but Iran did not remain silent in this matter and did not give them the green light and was the first country that condemned the aggression and helped the displaced people of Kuwait”.

Emphasising that the Islamic Republic of Iran has always been a supporter of Muslims and its neighbours, and contributed to regional security, Dr Rouhani said, “Unfortunately, the UAE has made a big mistake and we hope it will return from this wrong path. We warn them not to want to invite Israel to the region, in which case they will be treated differently”.

Stating that the failure of the United States is a sign of the power of the half-dead JCPOA that has stood against the United States and defeated it, Dr Rouhani added, “The reason why the resolution had 11 abstentions and 2 votes against it was because everyone believes that maintaining the JCPOA is necessary for world security and the United States failed miserably in this area, and this year’s Mubahala Day was recorded in the history of Iran in fighting the Global Arrogance”.

Dr Rouhani emphasised, “The Islamic Republic of Iran, with its power in the region and by cooperating with its friends with whom it shares common goals, has achieved great successes so far, and yesterday was a great political victory for Iran and a disgraceful defeat for the United States. We hope that the countries of the region will learn a lesson and will not approach the usurper countries”.