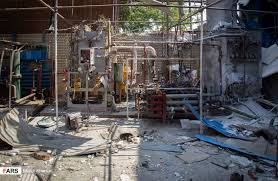 Reuters – An explosion and ensuing fire injured at least four people in a district with many publishers and bookshops in Iran’s capital Tehran, state media reported on Saturday, the latest in a series of blasts and fires, some of which have hit sensitive sites.

Fire department spokesman Jalal Maleki told the state news agency IRNA that the blast late on Friday caused the fire that engulfed the four storey building near Tehran University where paper and books were stored.

Firemen rescued three men and a woman who were rushed to hospital and put out the blaze, Maleki said. The cause of the blast was under investigation.

Among other incidents in the past few weeks was a fire at the underground Natanz nuclear facility which caused significant damage, but Iranian officials said operations were not affected.

In an explosion at a medical clinic in the north of Tehran in July, 19 people were killed. Officials said it was caused by a gas leak.

On June 26, an explosion occurred east of Tehran near the Parchin military and weapons development base that the authorities said was caused by a leak in a gas storage facility in an area outside the base.