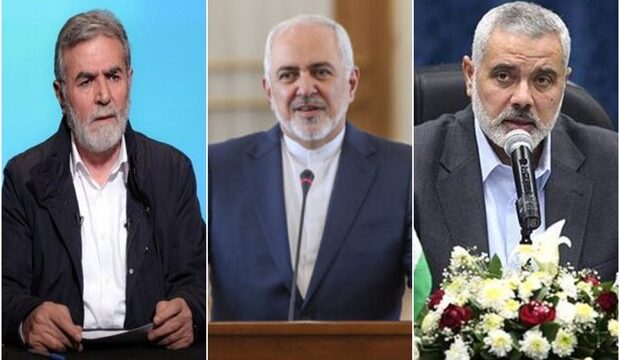 Speaking with the head of Hamas Political Bureau Ismail Haniyeh late on Friday, Zarif slammed the deal between UAE and the Zionist regime and reaffirmed Iran’s support to the Palestinian cause.

For his part, Haniyeh appreciated Iran’s support for the Palestinian issue. Palestine will continue the path of resistance against the occupation and it will not be influenced by such treacherous acts, he added.

“We feel pain from this dagger that entered the body of the Palestinian people from behind,” he said, emphasizing the need to take a joint stance by the Palestinian officials and groups leaders.

The Iranian diplomat said that the treacherous move of the UAE and the Zionist regime has no impact on the resistance.

Al-Nakhala, for his part, appreciated Iran’s permanent support to the ideals of Palestine, saying that the vicious act will not affect the resistance of the Palestinian people.

Zarif arrived in Beirut on Thursday night and held separate meetings with Lebanese officials on Friday to express Iran’s solidarity with the country over the tragic blast in Beirut port.

Mohammad Javad Zarif, UAE-Israel deal, Ziad al-Nakhala August 15, 2020
UNSC vote against arms embargo a ‘no to unilateralism’
US’ historic failure in UNSC yesterday recorded in history of our fight against arrogance: Rouhani