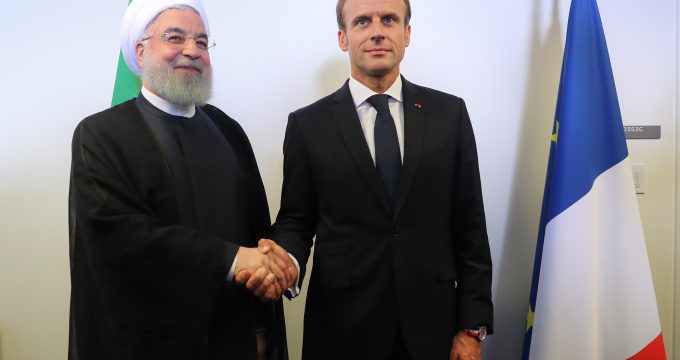 US has no right to use JCPOA mechanism, Rouhani tells Macron

MNA – Iranian President Hassan Rouhani said that the United States has no right to use the mechanisms of the JCPOA since it has ceased participation in the deal.

In a telephone call with the President of France on Wednesday, Rouhani emphasised that Europe should not be influenced by the United States and fall into the trap of this country, adding, “Based on Resolution 2231 of the United Nations Security Council, Iranian arms embargo must be lifted from October 18, and if the United States wants to do anything against it, it is a violation of the resolution.”

“The draft resolution that the Americans have proposed to the UN Security Council is a violation of Security Council Resolution 2231, and all countries, especially the P4+1, must strongly oppose it,” he said, according to his office’s website.

“The preservation of the Joint Comprehensive Plan of Action (JCPOA) and UN Security Council Resolution 2231 is a fundamental commitment of all countries that have remained in the JCPOA today, and we expect that weather in the International Atomic Energy Agency or the Board of Governors and in the UN Security Council, careful consultation and cooperation between Iran and the three European countries and Russia and China should be done to prevent the opponents of the JCPOA from achieving their goals.”

The President stated that the United States has no right to use the JCPOA mechanism, because it has withdrawn from the deal for more than two years.

Rouhani also said that the US approach to illegal and inhumane sanctions against Iran during the coronavirus pandemic is very ugly and in contradiction with international regulations and WHO resolutions of 2005, and stressed the need for European action to activate economic cooperation with Iran and cooperation in the fight against COVID-19.

“It is very important that we all help the Lebanese judiciary to find the root causes of this incident,” he said, referring to the current situation in Lebanon following last week’s horrific explosion in Beirut.

Referring to Iran’s aid to Lebanon immediately after the incident, Rouhani said, “Lebanon needs more unity among political groups and we must all help to create this unity. Lebanon today needs a strong government, and the Lebanese parliament and all parties must work together in this regard.”

In this telephone conversation, Rouhani also referred to the situation of coronavirus pandemic in countries around the world and the second wave of this disease, and emphasized the continued cooperation of countries to control the disease.

The President of France said in this phone call, “Our views on the extension of the arms embargo on Iran are quite different from that of the United States, and we have made this clear to them.”

Referring to the situation in Lebanon after the horrific explosion in Beirut last week and his visit to Lebanon, the French president called on Iran to help resolve the Lebanese political crisis and invited Iran to join the international action group to resolve the Lebanese crisis.

Emmanuel Macron, Hassan Rouhani, JCPOA August 13, 2020
US goes it alone to keep weapons out of Iran
Schools to reopen in Iran based on odd-even plan: Education Minister