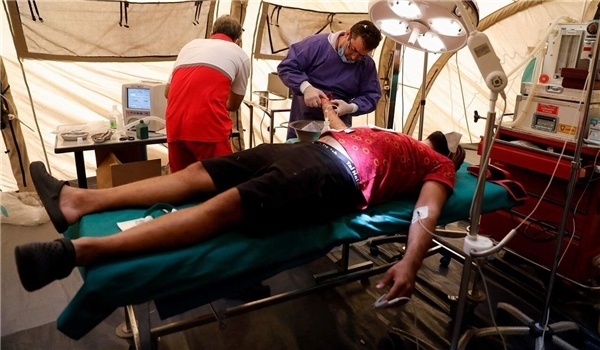 FNA – Director of the field hospital set up by Iran’s Red Crescent Society in Beirut announced on Wednesday that nearly 700 people wounded in the recent devastating blast have been treated in the hospital so far.

“The IRCS’s field hospital was set up in Beirut on August 8 to treat the people injured in the blast incident and nearly 700 people have been admitted by the hospital by the end of August 11 and received hygiene and treatment services,” Mohammad Baqeri Mohammadi said on Wednesday.

He added that minor surgery operations were also carried out in the field hospital with efforts of the medical staff who have been dispatched from Iran to Beirut.

Iran has dispatched 95 tons of aid to Beirut, Head of Iran’s Red Crescent Society (IRCS) Karim Hemmati said on Sunday, adding that another 60-ton cargo will also be sent to the Lebanese capital soon.

Hemmati said that 95 tons of aids containing various medical items and foodstuff have already been sent and an additional 60 tons will also be sent soon.

A mega explosion rocked the Lebanese capital on August 4. Terrifying footage showed a huge mushroom cloud of fire and smoke covering much of Beirut’s port area, blowing out windows and destroying buildings in the neighborhood, as a warehouse at the Beirut docks caught fire last Tuesday afternoon. Photos on social media showed many buildings in the area damaged or destroyed, leaving residents covered in glass and blood.

Several smaller explosions were heard before the bigger one occurred and turned the city’s streets into a debris-strewn wasteland.

Lebanon’s Ministry of Health announced that over 170 people have been killed in the blast at Beirut’s port, while at least 6,000 others have been injured. The explosion left 300,000 homeless, as vast part of the city has been fallen into ruin. Red Cross volunteers at the scene of the explosion declared they expect the death toll to rise.

Lebanese rescue workers and army soldiers are struggling to remove huge items of debris in search for possible survivors at Beirut’s port. The Lebanese Red Cross believes there are still tens of people missing.

Health Minister Hamad Hassan blamed the explosion on a fireworks accident, ordering all hospitals in Beirut to prepare for the victims of the incident.

Lebanese General Security Director Abbas Ibrahim has also dismissed rumors of Israeli involvement, noting that a large cache of highly explosive sodium nitrate was stored at the site, after being confiscated off a ship several months ago. He did not explain how the fire has started.