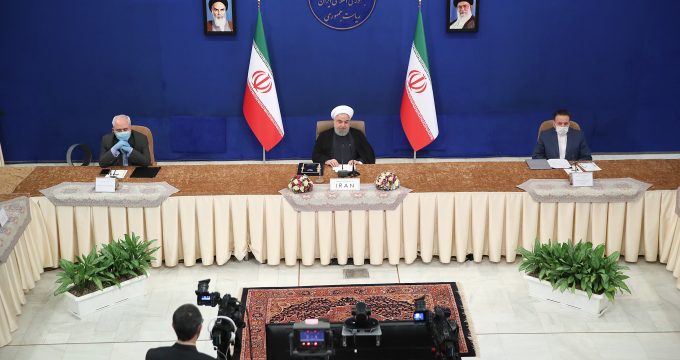 US to become isolated in bid to extend Iran arms embargo: Rouhani

Tasnim – Iran’s president reminded the US government of the failure and subsequent isolation it will have to suffer in its push for the extension of a UN arms embargo on the Islamic Republic, and warned of the consequences that the initiator of the plan is going to face.

Speaking at a cabinet session on Wednesday, President Hassan Rouhani said Tehran is very hopeful that the US will be defeated and face isolation in its attempt to extend the arms embargo that is going to expire in October in accordance with the 2015 nuclear deal.

He also warned that a possible ratification of the US-initiated proposal would be a clear violation of the UNSC Resolution 2231 and the JCPOA, and that the parties behind the ploy should accept the consequences.

He also dismissed the claim by the US president that he would be looking for peace with Iran immediately after re-election.

“If you are sincere and seek peace, which you have never been after, why do you take such actions against the Iranian nation, the US nation, and the region?” Rouhani told in response to Trump.

The US will be unable to satisfy the world’s public opinion, Rouhani said, denouncing the “unreliable US” for breaching its legal and international commitments.

The president further cautioned certain neighboring states not to fall victim to the US ploys and issue anti-Iranian statements.

He once again assured the neighboring countries south of the Persian Gulf that Iran’s defense power serves regional interests and is not against any state.

Those plundering the assets and resources of a country to sell arms for attacking Yemenis are acting against the arms purchasers, Rouhani said.

The US on Tuesday circulated a revised resolution that would extend the UN arms embargo on Iran indefinitely.

Analysts say the US has no chance of winning support in the 15-member Security Council where veto-wielding Russia and China have voiced strong opposition.

Iran has already warned of decisive response to any extension of the arms embargo that will be terminated in October.