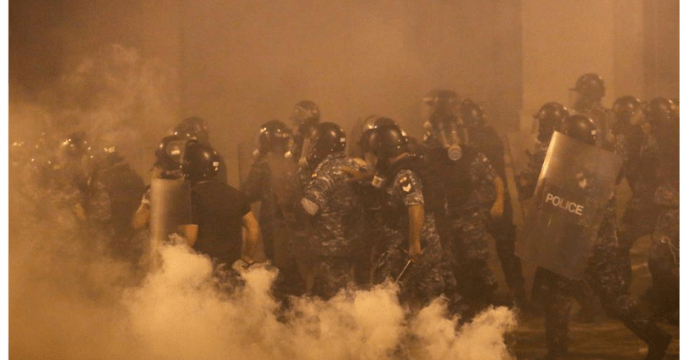 MNA | Ramin Hossein Abadian:  After the Beirut blast, there needs to be more accountability on the part of Lebanese authorities, yet some foreign-backed internal parties have been advocating a political coup against the government.

Soon after the devastating explosion that gutted out the port area of the Lebanese capital, Beirut, a wave of political exploitation of the turbulent situation was triggered. Before the explosion, Lebanon’s former Minister of Foreign Affairs and Emigrants, Nassif Youssef Hitti, was forced to resign under foreign pressure, and after the explosion, pressure intensified against Prime Minister Hassan Diab, calling for his resignation. American and Saudi media, in the meantime, made efforts to intensify their pressure on Lebanon in general and against Hassan Diab in particular, in a bid to cause tension and create a political vacuum in the country.

Foreign pressure on Hassan Diab’s government, aimed at creating a political vacuum in Lebanon, escalated to the point where the Lebanese Minister of Health announced the resignation of the Lebanese cabinet. Beirut-based Al Mayadeen satellite television channel also reported that Hassan Diab would announce his resignation shortly afterward.

Following the resignation of former Lebanese Foreign Minister Nassif Hitti, Hassan Diab quickly appointed his successor in order to prevent a political vacuum in his country. Political developments in Lebanon were once again on the right track after the appointment of a new foreign minister when a sudden explosion in the port of Beirut changed all equations.

Thus, the Beirut explosion became a perfect pretext for certain leaders of the domestic parties and their foreign allies to exact some political revenge against the government and the resistance movement in Lebanon. They saw the post-explosion conditions as a perfect opportunity to implement a pre-planned scenario of overthrowing the government. That is why the resignation process did not end with the former Lebanese foreign minister and went as far as to include the minister of Information, minister of Environment and Administrative Development, and also the minister of Justice.

In addition to some of Hassan Diab’s cabinet ministers, a number of Lebanese parliamentarians have also resigned. Among them are representatives of the Kataeb Party affiliated with the March 14 Alliance and some other figures in this coalition. All of these people cited their reason for resignation as having lost all hope for improvement of the current situation of Lebanon after the Beirut explosion.

This trend of resignations reveals a collective effort based on a pre-designed scenario in order to overthrow the cabinet – something that will eventually lead to a political vacuum in Lebanon and will have many adverse consequences in various aspects. In the meantime, one must not ignore the role of the United States and France as the two most influential actors in leading the overthrow of the Lebanese government.

Earlier, the Lebanese daily Al Akhbar, referring to the efforts of Washington and Paris to weaken the government of Hassan Diab, wrote, “the US has always sought to weaken Hassan Diab’s government due to the positions taken by the government. The US ambassador’s series of interventionist remarks on Lebanese political and domestic issues prior to the Beirut explosion testifies to this claim. Following in the footsteps of the United States, France has exerted heavy pressure on the Diab government. Paris is furious with Diab.”

On the other hand, a cursory glance at the series of interventionist remarks made by French President Emmanuel Macron after his visit to Lebanon following the horrific explosion at the port of Beirut reveals the extent of foreign intervention to create a political vacuum in Lebanon. “I will return on the first of September, and if they [the Lebanese leaders] can’t do it, I’ll take my political responsibility,” Macron said in remarks to crowds of locals in Beirut.

These clear and straightforward statements by the French president showed that he was seeking to revive the French colonialism of Lebanon through “dancing on the ruins of Beirut” and considered the creation of a political rift in the country as a prelude to achieving this goal. In the meantime, one cannot simply ignore the role of some internal movements in Lebanon, especially the March 14 coalition, for siding with foreign sides in a bid to create a political crisis in Lebanon.

A case in point is the recent remarks of Walid Jumblatt, president of the Progressive Socialist Party, whose position has always been close to that of the March 14 coalition. He has explicitly called for the overthrow of Hassan Diab’s government and stated that this government should be put on trial! Some media outlets affiliated with March 14 coalition have also maintained that the countdown to the overthrow of the government would begin in the coming weeks! These remarks show that some internal parties in Lebanon have put on the agenda a “political coup” against the government with the aim of overthrowing it.

From what has been said, it is clear that the recent wave of resignations in Lebanon is not spontaneous but a pre-planned scenario and its perpetrators have decided that the turbulent situation caused by the Beirut explosion is the perfect time to execute this scenario.