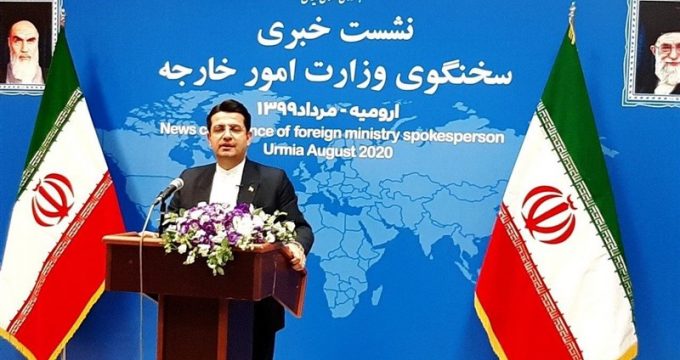 Iran dismisses ‘Ridiculous’ claims of interference in US Election

Tasnim – Iran’s Foreign Ministry spokesman rejected as “ridiculous” reports that Iran is interfering in the upcoming US election.

“This is one of the ridiculous claims that the Americans have been raising recently with respect to the blurry prospect of elections in their country,” Mousavi told reporters on Monday.

Iran does not care much about parties and factions in the US, he said, adding, “What we care about is their behavior and the way they interact with us.”

The comments came after Reuters claimed in a recent report that Iranian citizens had been receiving text messages in Farsi offering them up to $10 million for information about attempts to interfere with the US election.

On Wednesday, Secretary of State Mike Pompeo told reporters the US was now offering up to $10 million “for information leading to the identification or location of any person who, acting at the direction or under the control of a foreign government, interferes with US elections by engaging in certain criminal cyber activities.”

Russian media reported that citizens there also received similar messages on Thursday. Russian Foreign Ministry spokeswoman Maria Zakharova joked on Facebook that the US State Department’s website would be overwhelmed by denunciations.

The Iranian spokesperson categorically rejected the claims and said, “The text messages constitute a violation of people’s privacy rights”.