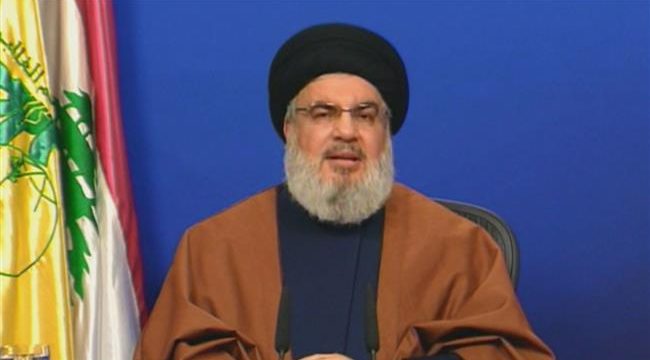 Tasnim – Secretary General of the Lebanese Hezbollah resistance movement Seyed Hassan Nasrallah categorically denied the Western reports that the fatal blast in Beirut had been caused by the missiles and ammunition that Hezbollah may have stockpiled at the port.

In a televised speech on Friday, Nasrallah rejected the fabricated reports that stores of ammunition belonging to Hezbollah have caused the August 4 explosion in Beirut port.

“I categorically deny the claim that Hezbollah has stores of missiles, ammunition or anything else,” he noted.

Nasrallah also offered deep condolences to the families of the martyrs of the Beirut blast, hoping a speedy recovery for the wounded.

“We are in face of a major humanitarian and national catastrophe according to all the standards,” he added.

“There are more than 150 martyrs; the majority of them are Lebanese, with a remarkable number of Syrians and nationals from different countries… There are thousands of wounded, and dozens are missing. Tens of thousands of families left their homes damaged by the explosion… Livelihoods of thousands were affected, and a panic that stormed the hearts of millions… Buildings shook in a way that made people believe that it was a major earthquake or that there was an explosion close to them,” Nasrallah noted.

He then highlighted the major negative effects of Beirut blast on the humanitarian, medical and economic situation in the country, Al-Manar English website reported.

“Beirut blast has been completely obliterated. This would cause major economic losses… This explosion affected all the Lebanese with all their sectarian affiliations,” he stated.

Secretary General of Hezbollah then stressed that all Lebanese people must face such catastrophes in an exceptional way psychologically, politically and in media, adding, “We must express sympathy, love and solidarity with each other.”

He also hailed the speedy reaction from the civil committees in helping the state authorities, adding that the role of the medics, rescue teams, municipalities, religious boards and individuals was vital in face of the consequences of the calamity.

Nasrallah also emphasized that Hezbollah’s followers, institutions, and committees rushed after the explosion to provide relief aids to the affected people, reiterating the party’s readiness to assist the government authorities in the face of the catastrophe and provide temporary shelters for those whose houses were damaged or destroyed.

He further hailed the stances taken and the relief aids sent by the Arab and foreign governments as well as the resistance movement to support Lebanon despite the siege imposed by the United States, pointing out that Hezbollah views the visit of the French President positively as it comes in the context of helping and uniting the Lebanese.

“We wish the US imposed its siege just on Hezbollah, not on all the Lebanese.”

Nasrallah added that when catastrophes occur, everyone halts disputes and conflicts in order to preserve unity in the face of the challenge, but after the Beirut explosion, this has not happened unfortunately.

“Just after the explosion, some local and Arab TV channels as well as social media pages adopted an alleged scenario which claims that Beirut port’s warehouse which exploded contained missiles or ammunition of Hezbollah. Although official sources denied the presence of missiles in the port and confirmed the existence of nitrate used for agricultural and industrial purposes, they (local and Arab TV channels) insisted that the ammonium nitrate had been stored by Hezbollah for six years in order to blame the party for the explosion,” he deplored.

Nasrallah stressed that this claim is an unjust defamation, adding that they follow the propaganda law that “Repeat a lie often enough and it becomes the truth.”

“I categorically deny the claim that Hezbollah has stores of missiles, ammunition or anything else.”

“Although the US administration and the Western media stopped promoting this unfair claim, some Lebanese and Arab TV channels continued circulating it,” he said.

Nasrallah stressed that Hezbollah neither runs Beirut port nor does it interfere in its administration, adding that the resistance knows more about Haifa Port in the occupied Palestine than Beirut Port.

He said that the investigations are going on and can reveal the truth about the explosion and the stored substances within a short time, calling on all Lebanese to boycott the media outlets involved in falsifying the truth.

Nasrallah said he would not be engaged in political quarrels with the parties attempting to utilize the explosion, stressing that it is the time of sympathy and solidarity.

Hezbollah leader underlined the importance of holding just and serious investigations that can reveal the truth as called for by the President and the Prime Minister in order to push for fair punishments on all the culprits regardless of their religious and political affiliations.

Truth and justice must prevail, he added, proposing that the Lebanese Army should hold the investigations and identify the culprits “as all the political parties trust it”.

The way how the foreign countries are dealing with the consequences of the explosion opens new chances that must be seized by the Lebanese, Nasrallah said.

Addressing those who have been engaged in a battle against Hezbollah on the basis of Beirut explosion, Nasrallah said, “You will not reach any result.”

“The international and regional situation has changed. Hezbollah is too strong to be overcome by some unjust liars who commit forgery and push for the civil war,” Nasrallah underlined.