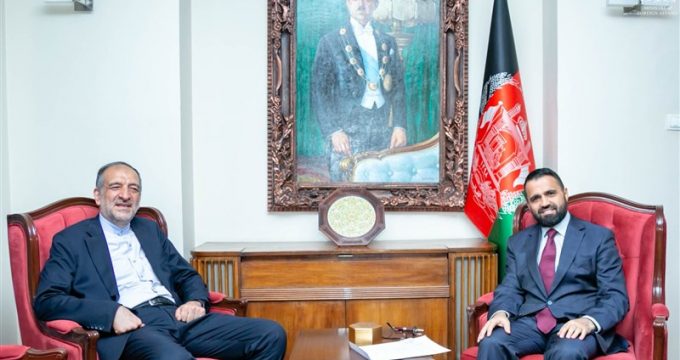 Tasnim – Iran’s ambassador to Kabul gave an assurance that Tehran will keep supporting the process of peace in Afghanistan.

In a meeting with Afghan Deputy Foreign Minister for Economic Cooperation Mirwais Nayeb, the Iranian envoy, Bahador Aminian, highlighted the deep-rooted ties between the two neighboring nations, saying Tehran will keep providing constant support for the peace process in Afghanistan.

The two diplomats discussed a broad range of issues in the meeting, including the problems that Afghan refugees face in Iran, education for Afghan children in Iran, as well as promotion of economic and cultural interaction between the two neighbors.

Aminian and Nayeb also talked about the plans to hold a consultative Loya Jirga meeting for peace, the regional and international consensus on the Afghan peace process, and immediate launch of the intra-Afghan negotiations.

In a telephone conversation with President of Afghanistan Ashraf Ghani on Saturday, Iranian President Hassan Rouhani expressed Tehran’s support for the peace process in Afghanistan under the guidance of the Kabul government, hoping that the intra-Afghan negotiations would yield results with the inclusion of all Afghan groups.