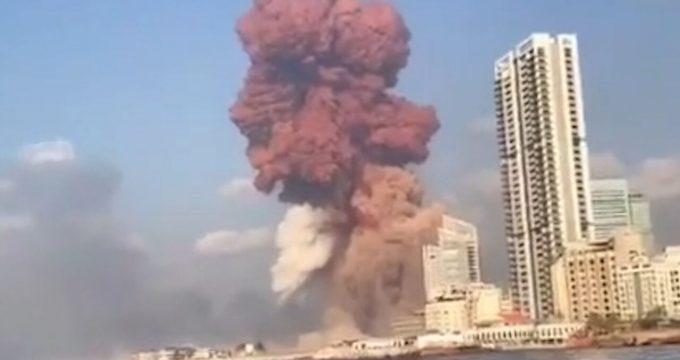 MNA – Lebanon rejects President Trump’s claims that the Tuesday’s massive blast in Beirut was caused by enemy action rather than an industrial incident.

Lebanon announced that there has been no indication of attack after Trump claimed the Beirut explosion was caused by a bomb, the Newsweek reported.

“As far as the Lebanese government is concerned, we have no indication thus far that this was in any way caused by a deliberate attack or bombing of any kind,” Lebanese ambassador to the United States Gabriel Issa said in a statement sent to Newsweek.

“Initial indications are of a chemical storage massive explosion and investigations are ongoing to determine the cause,” he added.

As Lebanese officials began to identify the cause of the blast as the result of fireworks improperly-stored ammonium nitrate, grain silos, or some combination of these factors at Beirut’s port, President Donald Trump went against the grain by describing the event as “some kind of terrible attack.”

Trump had told reporters that his remarks were based on discussions with defense officials who shared his assessment.

“It would seem like it based on the explosion. I met with some of our great generals and they just seemed to feel that it was, that this was not some sort of a manufacturing explosion type of event,” Trump told a Tuesday evening press conference hours after the blast. “They would know better than I would, they seem to think it was an attack, it was a bomb of some kind.”

The earth-shattering explosion has killed at least dozens and injured thousands, causing destruction throughout the city and sending shockwaves throughout the tiny Mediterranean country already beset by multiple economic, security, and health crises.

By the present time, Lebanese authorities have said at least 100 people have been killed and more than 4,000 wounded in a massive explosion at the port in the capital, Beirut.

Iran has expressed full readiness to render any necessary help to Lebanon after the massive explosion rocked the Lebanese capital.