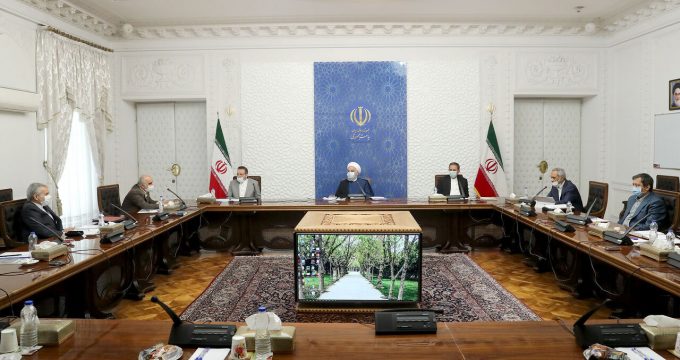 IRNA – President Hassan Rouhani said the main part of the enemy’s war on Tehran is attempting to instill that the Iranian government is effective, distort its capabilities, and deny its successes in order to disappoint people and weaken resistance to the US economic war.

Referring to Supreme Leader of the Islamic Revolution Ayatollah Seyyed Ali Khamenei about the enemies short-term and long-term goals to stop economic progress of Iran, President Rouhani said that the enemy is using sanctions and distortion of realities to pursue its goals of stopping economic progress of Iran, drawing a black picture of its achievements, and instilling disappointment.

Speaking in the 157th meeting of the government’s economic coordination board, Rouhani said that the enemy is feeling the defeat more than anyone else, spreading rumors and misinformation, instilling that the government is ineffective, and, most importantly, creating a rift between the officials of the country are actually in line with the goals of the enemy.

He said that the officials need to get united to effectively fight against the psychological war, sanctions and distortions, and added that the honorable people of Iran have always supported the Islamic System and definitely all the achievements and successes have ridden on that support, wisdom, and resistance.

He added that Iran has been under unprecedented pressures over the past two years, but, has managed to reduce dependence on oil income; the government has also managed to provide basic needs of the country and prevent unemployment from getting worse.

President Rouhani said that inaugurating big projects is like a thorn in the eye of the enemy and that they are angry with the people of Iran and try to deny facts like agricultural self-sufficiency and increase in production in different fields.

Referring to the heavy damages inflicted by the coronavirus on the economy of the world, even world powers, President Rouhani said, according to other countries, the Iranian government has to fight wars of the sanctions and coronavirus at the same time, adding that Iran has had eye-catching successes in economy and campaign against coronavirus.

Comparing the decrease in GDPs of Europe (10%) and the US (30%), Iran has shown better resilience, he said.